Working With Beyoncé Is An Honour- GuiltyBeatz 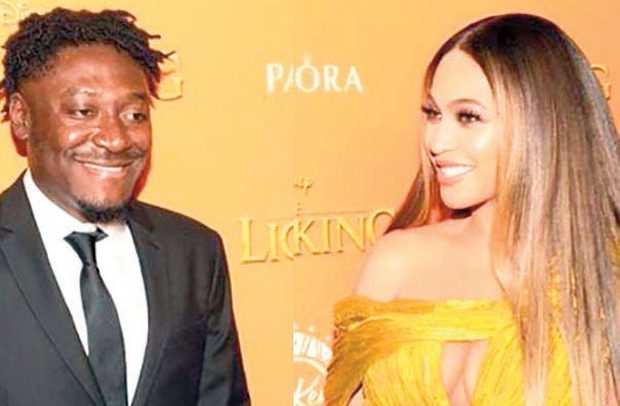 GuiltyBeatz with Beyoncé at London premiere of the Lion King

The ‘Akwaaba’ hitmaker is currently one of the producers who worked on Beyonce’s upcoming album, ‘The Lion King: The Gift’.

He had production credits on three songs on the album, namely ‘Find Your Way Back (Circle of Life)’ by Beyoncé, ‘Keys to The Kingdom’ by Tiwa Savage and Mr. Eazi and ‘Already’ which features Shatta Wale.

GuiltyBeatz is the only Ghanaian producer to have aided in the production of some songs on the album.

On Wednesday, GuiltyBeatz, born Ronald Banful, took to social media to describe working with Beyoncé as an honour.

“?All praise to God Almighty. I’m grateful to have worked on the Lion King: The Gift Album. Working with and getting to know the Queen, Beyoncé has been an honour!!! Thank you and love you @marielgomerez @nikitachhn @raye @p2jmusic @mreazi Teresa Lababera, Kwesi , Jenna, Ricky,” he said in a post.

Beyoncé, indeed, is one of the biggest and most powerful entertainers in the world, and working with her is a very big deal.

She described the upcoming album as a ‘Love Letter To Africa’, and it will be released on July 19.

GuiltyBeatz was born in Italy and came to Ghana at the age of six. His interest in music began as a child when he received his first piano at the age of one. His passion for music has grown ever since.

At the age of 14, he began to make beats with ‘Music DJ’ on a Sony Ericsson phone, and that’s when he became known for producing. He did beats for rap battles in junior high.

GuiltyBeatz plays the piano very well, gathering inspiration from people around him. He taught himself how to play the piano and that’s what gives him a lead in the Ghanaian music industry.

In April 2010, GuiltyBeatz was signed by the record label, Star Productions.

He then began using logic pro for production and came into contact and worked with many of the Ghanaian artistes such as Sarkodie, R2bees, Tiffany, Dcryme, Stonebwoy, Chase, Stay Jay and many more.

He also has had the opportunity to work with other talent artistes outside of Ghana such as Jesse Jagz, WizKid, Kay Switch and Mr. Walz in Nigeria. He has even gone as far as the UK to work with Mr. Silva, Tribal Magz and Moelogo.

He has just added Beyoncé to the tall list of artistes he has ever worked with, and he feels it is an honour to work with her.