You Have My Life-Long Respect – Nana To Former IGP 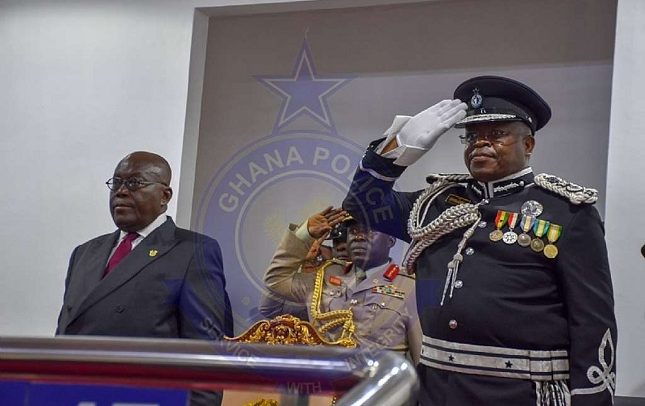 The ex-IGP with the President

President Akufo-Addo has admired the immediate-past Inspector General of Police (IGP), Mr. James Oppong-Boanuh, for his meritorious services to the country.

The President said Mr. Oppong-Boanuh’s calm and professional manner in which he led the police during the 2020 general election to ensure peace and stability is worthy of commendation.

At the confirmation and swearing-in of Dr. George Akuffo Dampare as the IGP, the President said the services rendered to the country were distinguished.

“I must at this point pay some tribute to Mr. James Oppong-Boanuh for his distinguished service to the Police Service in our nation, especially for the calm and professional manner in which he led the operation of the police to ensure the peace and stability of the country during last December presidential and parliamentary elections,” the President said, adding “it was a period of considerable sensitivity for the unity and welfare of the Republic. He has my life-long respect and I wish him well on retirement.”

The President also said the newly sworn IGP has also demonstrated he is an effective leader poised to do the job.

“Today, he has reached the pinnacle of his career and will serve for the next four years as Inspector General of Police. He’s demonstrated that he will be an effective leader of the Police Service and help foster in its efficiency. He will be walking in the footsteps 22 previous occupants of the office and I have no doubt that in Dr. George Akuffo Dampare we have a worthy successor to Mr. James Oppong-Boanuh and indeed the others who have gone before him,” the President said.