You Have My Support’ Nana Assures Legon VC 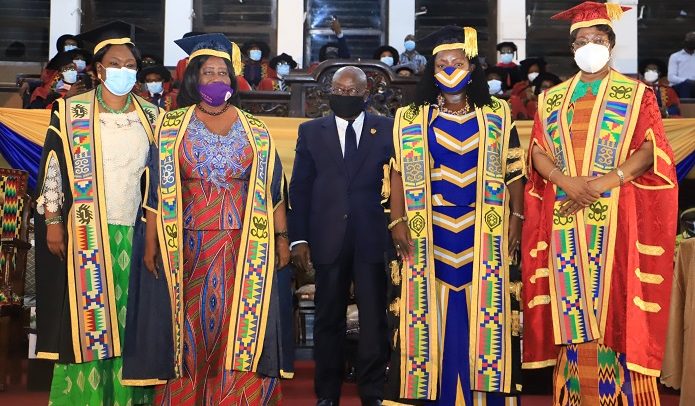 The President with the Vice-Chancellor and other women dignitaries

This was after he swore her in as the new Vice Chancellor of the premier university in Accra Tuesday evening.

Speaking at the swearing-in ceremony, the President said “Our country is undergoing some significant reforms in her educational system. The most far reaching of which, is the significant broadening of access to education at all levels of educational structure.”

He therefore stressed the need to mobilise all the talents and resources without discrimination to make the decisive push for the social and economic transformation that the country seeks.

Whilst he admitted that those in leadership positions in the country’s educational structure have unprecedented challenges before them, he noted that “I am confident that the premier university, the status that would be attached to Legon forever has in our new Vice Chancellor, chosen a person who would be adequate for this formidable task.”

“You will definitely have my support and I will be hopefully your successful advocate with the Minister for Finance,” the President added.

He thanked the University under leadership of the former Chief Justice Sophia Akuffo, CJ for their bold decision in nominating Professor Nana Aba Appiah Amfo to be Vice Chancellor of the University of Ghana.

Last week, the Council of the University of appointed Prof. Amfo as the substantive Vice-Chancellor of the university.

The appointment took effect from October 26, 2021. She was appointed Acting Vice-Chancellor in July to succeed Prof. Ebenezer Owusu Oduro.

Prior to her appointment, she was the Pro-Vice-Chancellor for Academic and Student Affairs from November 1, 2019.

An alumna of the University of Ghana, Professor Nana Aba Appiah Amfo had her secondary education at Holy Child School and Archbishop Porter Girls’ Secondary School.

She proceeded to the University of Ghana from 1991 to 1996 for a Bachelor’s degree in French and Linguistics. Both her MPhil (2001) and PhD (2007) degrees in Linguistics are from the Norwegian University of Science and Technology in Trondheim, Norway.

Her research interests are in the linguistic sub-discipline of Pragmatics, which allows her to explore the role that context plays in our conversational interactions and how that influences communication in different domains.

Before her appointment as Pro-Vice-Chancellor, Professor Appiah Amfo served as Dean of the School of Languages, having previously served as the Head of the Department of Linguistics from 2013 – 2014.

She has participated in the governance of the University of Ghana through her service on several statutory and adhoc boards and committees.

Professor Appiah Amfo is currently an Advisory Board member of the Coalition of People against Sexual and Gender Based Violence and Harmful Practices (CoPASH) – A UNFPA supported programme.

She is a member of several professional associations including the Society of Communication, Medicine and Ethics, International Pragmatics Association (where she serves on its Consultation Board; the first African to serve in this capacity since the Association’s establishment in 1986); West African Linguistics Society and Linguistics Association of Ghana (where she served as President from 2010 – 2014); a pioneer fellow, senior scholar and Chair of the Steering Committee of the African Humanities Program of the American Council of Learned Societies.

She is also a fellow of the German Academic Exchange Services (DAAD), Commonwealth Professional.

Professor Appiah Amfo is married to Frank Amfo, and the couple has three children.

New GHA Board Sworn In