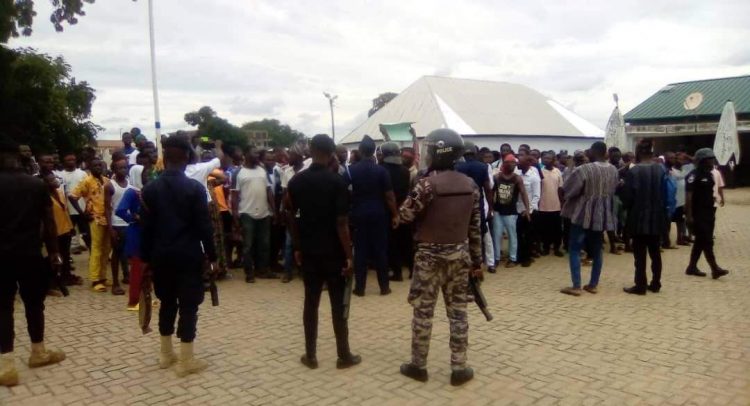 Some residents of Wa in the Upper West Region has demonstrated to express their displeasure over the recent alleged killings and kidnapping of some residents in the region.

The information available to DGN Online indicates that from 2021 to 2022, a total of 9 persons have been allegedly murdered /kidnapped in the region under some strange circumstances.

The youth marched to the Wa Naa’s palace to seek his intervention.

They burnt tyres at vantage locations in the Wa Municipality to demand justice from the Regional Security Council and leaders in the region to apprehend the suspects engaged in the murders/kidnapping.

The youth were however dispersed with tear gas from the police to prevent any unforeseen circumstances.

Meanwhile, a statement signed by the Upper West Regional Minister, Dr. Hafiz Bin Salih, has called on inhabitants within the municipality and region to volunteer information on people in their areas with suspicious characteristics to the security agencies to stop the current murder/kidnapping cases.

“Anyone with information on recent murders and disappearances should contact the nearest police station or security agency,” he said.

The statement further encouraged the formation of community or neighborhood watchdog committees under the supervision of the Ghana Police Service.

The Upper West Regional Minister urged landlords to inspect permits of tenants not of Ghanaian origin before renting accommodations to them and tasked the Ghana Immigration Service to furnish the Wa Municipal Assembly with updated information on all registered foreigners residing and doing business in the municipality.

The first issue occured on April 17. 2022 at High Ranking International School, he was killed with parts missing.

A man was also found buried with parts missing at T.I Ahmadiyya JHS on Bamahu Stretch.

A security Man who was employed to oversee two-story buildings was also found dead with parts missing including his heart according to the Police Commander.

Another security man was declared missing by the police along the Nakore Road on August 23, 2022. Name Yahaya Alhassan, aged 68.

On Sunday September 11, 2022 at Star Standards International School within Napogebakoleea victim was kidnapped and has not been found

In February 2021, a man by Name Kojo Kunta AKA Ogyam was killed in front of Info Radio.

Another man was also killed between Loho and Kaleo on 31st August 2022.