Youth In Afforestation Campaign For Nana 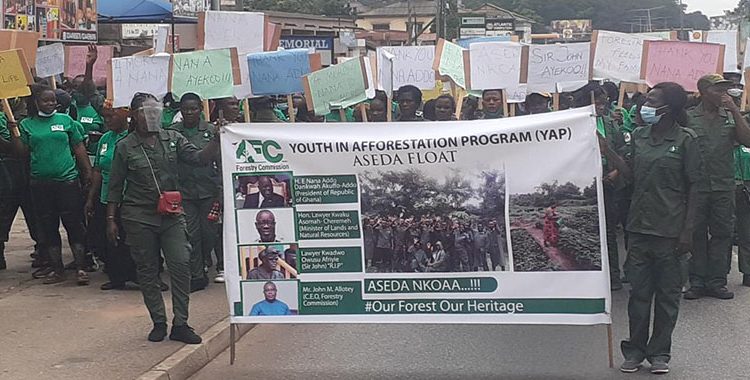 A massive float to show appreciation to President Akufo-Addo for his efforts to save the forest has taken place in Kumasi.

It was organised by the Youth in Afforestation Programme (YAP) in the Ashanti Region who marched through the principal streets to attract votes for the President.

During the float, the YAP staff were seen holding placards with inscriptions that indicated their deep appreciation to the President.

Some of the placards also had bold inscriptions that appealed to the electorate to renew the mandate of President Akufo-Addo to do more for Ghana.

Emmanuel Osei Aborah, YAP Ashanti Regional Secretary, in his address, lauded President Akufo-Addo for his vision to roll out such a youth-focused programme.

According to him, aside from providing jobs for the unemployed youth, YAP has also contributed significantly to save the forest, thereby ensuring food security.

“We are appealing to Ghanaian youth to be hopeful in the visionary leadership of the NPP government led by Nana Akufo-Addo for better future for Ghana,” he said, adding, “Let’s vote for number one, Nana Addo Dankwa Akufo-Addo four more to do more!”

The Ashanti Regional Manager of Forestry Commission (FC), Augustine Gyedu, also highlighted about how YAP has helped to tackle unemployment.

“We acknowledge the efforts of President Akufo-Addo for his initiative to engage over 65,000 Ghanaian youth under the YAP model,” he said.

He said YAP has also helped to save over 3,500 hectares of degraded forest lands in Nkawie, Kumawu, Offinso, Juaso and others through tree planting and also highlighted how YAP has contributed to make the country look green once again.

Kumasi Mayor Osei Assibey-Antwi assured that the NPP government would do more to help provide jobs and a secure future for the youth.