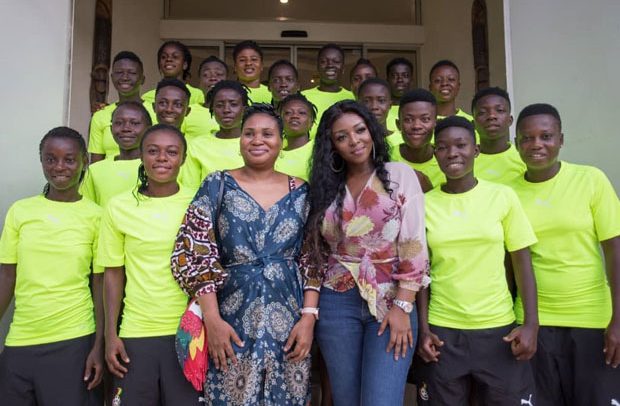 Yvonne Okoro in a pose with the Black Queens

Actress Yvonne Okoro has promised to give Ghana’s Black Queens a sum of $10,000, should the team make it to the semi-finals stage of the ongoing WAFU Zone B Women’s Cup of Nations in Abidjan, La Côte d’Ivoire.

The Queens, who are the current defending champions of the Women’s Cup of Nations title, won the maiden edition of the tournament last year.

The team opened this year’s campaign on Wednesday against Senegal in a Group A match. They will later meet Togo before subsequently playing host nation La Côte d’Ivoire.

Yvonne Okoro, who flew to Abidjan ahead of Wednesday’s game to support and motivate the team, is hopeful the team would make Ghana proud at the tournament.

Videos of her in Abidjan which popped up on social media on Tuesday evening showed her urging the Queens on to go for the cup.

“Go Black Queens, yes,” she screamed in one of the videos.

The actress, film producer and TV host, who was adjudged best radio and TV personality of the year during last Saturday’s Women’s Choice Awards, flew to Abidjan on the tickets of Ghana Football Association (GFA) to support the team.

Speaking to NEWS-ONE on Wednesday morning, she said, “I have promised to give the team a sum of $10,000 should they make it to the semi finals. I have high hopes they will make it to the finals but this is to further motivate them as we support them. I urge all Ghanaians to support the team.”