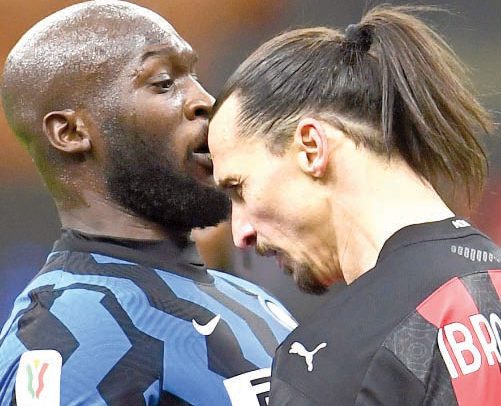 Lukaku (L) and Zlatan bumped heads during a heated exchange

AC Milan Coach, Stefano Pioli, said Zlatan Ibrahimovic had apologised after he was sent off during his side’s 2-1 defeat to rivals, Internazionale, in a fiery derby on Tuesday.

Ibrahimovic gave his side the lead in the Coppa Italia quarterfinal, drilling in off the post, before tempers became frayed in the San Siro.

Ibrahimovic and Romelu Lukaku, who played together at Manchester United, locked heads and exchanged words at the end of the first half, before the pair had to be restrained as the players left the pitch for the interval.

The referee cautioned both before giving Ibrahimovic another yellow card and a red in the second half for a foul on Aleksandar Kolarov—the first time the Swede has been sent off in Europe since being dismissed while playing for Paris Saint-Germain at Chelsea in March 2015.

“He (Ibrahimovic) apologised like the great champion he is,” Pioli said.

He said, “He got a bit caught up in the desire to help the team.

“It wasn’t easy to stay in the game a man down. The pressure from Inter was strong.”

Inter came from behind to win the match, with a penalty from Lukaku and a 97th-minute winner from Christian Eriksen, sending Antonio Conte’s side through to the semifinals.

“We paid for the effort in the last half hour and we couldn’t bring home a positive result,” Pioli added, saying, “It shouldn’t have happened, but that’s how it went.

“We are very sorry because we had prepared well for the game.”

Inter will play the winner of Juventus and SPAL’s quarterfinal clash on Wednesday, thanks to Eriksen’s late intervention off the bench, although Lukaku will miss the first leg of the semifinal due to a yellow card accumulation.