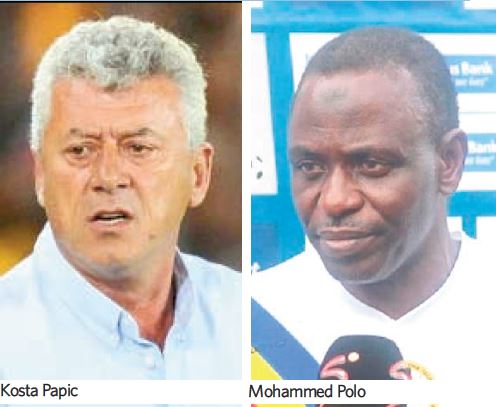 Ghana and Hearts of Oak legend, Mohammed Polo, has praised Kosta Papic copiously for guiding the Phobians steadily since taking over last December.

The Serbian took over from Edward Odoom and has since succeeded in transforming the capital based side to a winsome side.

His quest for excellence and success was made evident when he descended on his charges despite picking a vital away point from Berekum Chelsea last Saturday.

To him, a win in that game (Chelsea) would have made a strong statement saying, “…If you want to win the league, you have to win such matches.”

Polo said in an interview that “He has been fantastic so far. He is doing well and we hope he will maintain the form. There are reports that he says he wants to win the league for Hearts of Oak.”

He pointed out that it would take a concerted effort from the Rainbow family to ensure that the expatriate coach maintained his progress and ultimately win the league.

He added, “We must all back him. Let’s support him because he can do it. He needs some consistency so if he is able to get that constituency then he can win it.

“Look at where he picked the team from and where we are now, it shows that he has something good to offer.”

On Sunday, Hearts will cross swords with city rivals, Great Olympics, in a derby. A win for the Phobians and draw or defeat to current leaders, Karela, will take Hearts to the league’s apex.

Hearts are two points adrift from leaders with 16 points after 10 games.