Zuma hands himself over to police 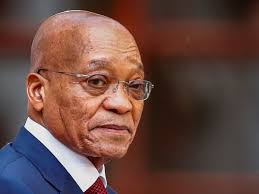 Former President Jacob Zuma has handed himself over to South African police to police begin his 15 months jail term.

He had earlier refused to hand himself over, with the police saying they will not arrest him until he fully exhausted his legal battle.

But his ruling African National Congress (ANC) party says he has handed himself over finally.

Mr Zuma has been handed a 15-month jail term for contempt.

Hundreds of his supporters gathered to show solidarity at his Nkandla homestead in Kwa-Zulu Natal province.

According to him, “Sending me to jail during the height of a pandemic, at my age, is the same as sentencing me to death,”

He had been been implicated in aiding and abetting the stealing of state funds during the nine years he led South Africa.

He was sentenced to 15 months in jail for defying a court order to testify at a graft inquiry.

The Constitutional Court had ruled in January this year that Mr Zuma had to respond to questions from a judicial commission headed by Deputy Chief Justice Raymond Zondo.

However, Mr Zuma refused to appear before the court.

The 79-year-old intelligence operative had accused the court of bias.

The operative walked out of the judicial panel hearing in November and February.

The panel then filed contempt charges against him.

Ruling on Tuesday, June 29, 2021, in Johannesburg, acting Chief Justice Sisi Khampepe noted that “This sends an unequivocal message in this our constitutional dispensation, the rule of law and the administration of justice prevails.”

The South African government believes over 500 billion rand ($35 billion) was stolen from the state during Zuma’s rule, and at least 40 witnesses who’ve appeared before Zondo linked the ex-president to the looting spree. Zuma, who the ruling party forced to quit in 2018 to stem a loss of electoral support, has denied wrongdoing and says the allegations against him are part of a smear campaign.

The ANC has noted that former president Jacob Zuma has since complied with an incarceration order issued by the Constitutional Court.

Without doubt this is a difficult period in the movement, and we call upon our members to remain calm and respect the decision taken by Zuma to abide by the rulings of the court.