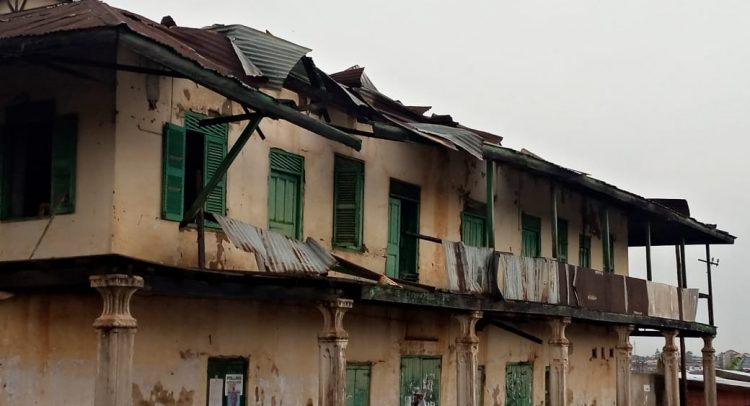 A terrible torrential rainstorm with heavy wind lasting just 15minutes on Monday displaced over 700 households, including basic and Senior High Schools at Akyem Oda in the Birim Central Municipality of the Eastern Region.

As a result of that, 10 persons reportedly sustained injuries. They were hospitalized at the Oda Government after the downpour.

DGN Online gathered the downpour managed to destroyed over 200 government and private properties including; houses, electricity poles, radio station mast, cars, shops, containers, kiosks, billboards, among others as teaching and learning materials amounted to thousands of cedis have all been lost. 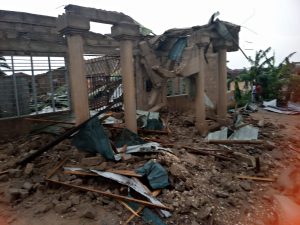 Some of the affected residents expressed to DGN Online that the heavy rains started around 4pm on Monday and within 15 minutes, it ripped off the roofs of some buildings.

Most of the victims, whose houses were destroyed, were left stranded as some expressed that they had to find shelter in the homes of their relatives.

The headmaster of Attafuah Technical School, Francis Koomson Barnes, said properties, including school buildings, were destroyed, adding that the situation had affected many school activities.

However, the Akyem Oda MP, Alexander Akwasi Acquah, when reports reached him, quickly rushed to the victims to sympathise with them.

He expressed shock at the extent of damage the storm had caused.

He appealed to the Birim Central Municipal Assembly and the National Disaster Management Organisation (NADMO) to, as a matter of urgency, put in place contingency measures to accommodate the displaced persons.

Meanwhile, the Eastern Regional Minister, Seth Acheampong and the Regional NADMO team also rushed to the scene to ascertain the damage on the grounds