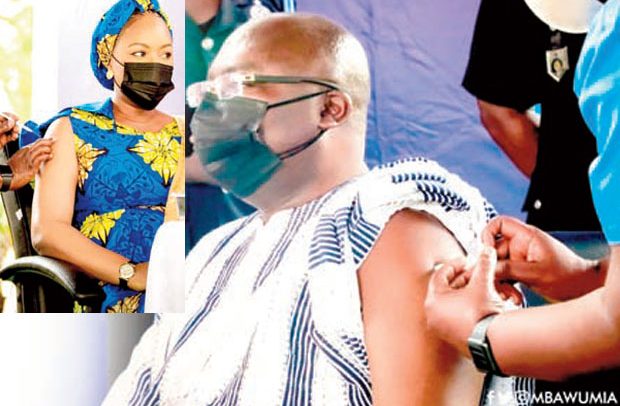 Some 162,541 Ghanaians who fall within the eligible groups in the Greater Accra, Ashanti and Central regions have received their Covid-19 vaccine.

According to the Ghana Health Service (GHS) situational report on the vaccination, 104,174 people have been vaccinated in the Greater Accra Region within the first five days of the exercise.

Giving a further breakdown of the figures, the GHS said 54,913 males and 49,261 females in the Greater Accra Region have received the Covid-19 vaccine.

In the Ashanti Region, 25,799 males and 29,342 females were recorded to have received the vaccine while 1,889 males and 1,337 females also received their vaccine in the Central Region.

This brings to a total, 82,601 males and 79,940 females who have received the vaccine in the three target regions since the exercise began on March 2, with President Nana Akufo-Addo and Vice President Mahamudu Bawumia and their spouses taking the first doses.

Cases
Meanwhile, the GHS has counted 350 new Covid-19 cases and three new deaths bringing the total number of fatalities to 640 from the previous 637.

Clinical recoveries from Covid-19 have increased to 80,619 with the country’s active case count now at 4,833.

Out of the total number of active cases, 66 patients are in severe condition while 24 others are in critical condition.

Regional Breakdown
The Greater Accra Region continues to record the highest number of cases counting a total of 48,120 Covid-19 infections, followed by the Ashanti Region, with 14,889 cases and the Western Region with 5,453 cases.