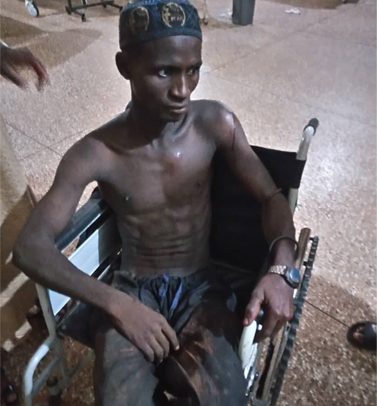 One of the Fulani Victims

Some angry farmers at Aboatsam, a farming community in the Upper Manya Krobo District of the Eastern Region, have allegedly attacked two Fulani herdsmen.

According to a source, the duo sustained injuries on the hands, shoulder and chest when the armed farmers descended on them over the weekend.

They were rushed to Assesewa Government Hospital where they are currently receiving treatment.

The farmers in the past weeks have waged ‘war’ on the herdsmen and their cattle for destroying their crops and polluting the water bodies in the area.

An assembly member, Andrews Gberbi, who narrated the incident to Kasapa FM, said “the Fulani herdsmen always destroy the crops on people’s farms with their cattle.”

He said the farmers invaded the farms with guns to drive away the herdsmen.

The Asesewa area has been identified as a hotspot for clashes between farmers and nomadics.

The farmer have vowed not to allow the herdsmen to use the cattle to destroy their farms and this has led to clashes in the area.

The police, who have since intervened, said they are investigating the matter.