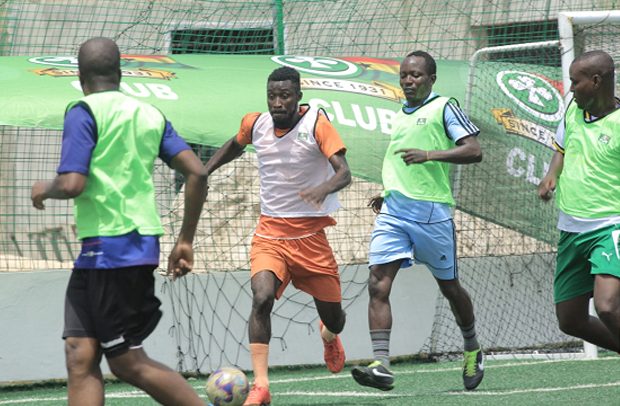 An action from scene last Saturday

CLUB BEER’S 5on5 tournament for both male and female amateur football players has completed its regional qualifiers with a series of matches held simultaneously across the country.

Other male teams which made it to the semi-finals from other regions were Friends of Gatosa, Rehoboth, Igbo Club, A Team, Super Stars, Snokca FC, Chelsea FC, 5-Stars and Dream Chasers.

Qualifying teams for the female category are Wisdom Ladies and Bishop Ladies, Greater Accra Region; Upper Queens, Upper West Region; Giggles, Do the Do, and Bela 5.

“We received more than 1,000 entries from amateur teams across the country and have been playing knock-out matches at local community levels, with the winners battling it out at the regional qualifiers,” ABL’s Head of Marketing, Ewurafua Addo-Atuah, indicated.

The 23 teams will play at the semi-finals this Sunday at the Zulka Sports Arena, Dansoman, from 12:00pm where four teams per category will be selected to participate in the ultimate showdown for a chance to be crowned national amateur champions on May 26.

“The tournament has so far been thrilling, and contributed tremendously to Club’s exceptional legacy as Ghana’s quintessential, and number one selling beer,” Ms. Addo-Atuah said.

The Club 5on5 is a continental football gala across eight other African countries in the Anheuser-Busch InBev (ABInBev) family.

The winning teams from Ghana will represent the country in a tournament in Tanzania in June 2019, as the Africa winners eventually travel to Europe for the ultimate football experience.