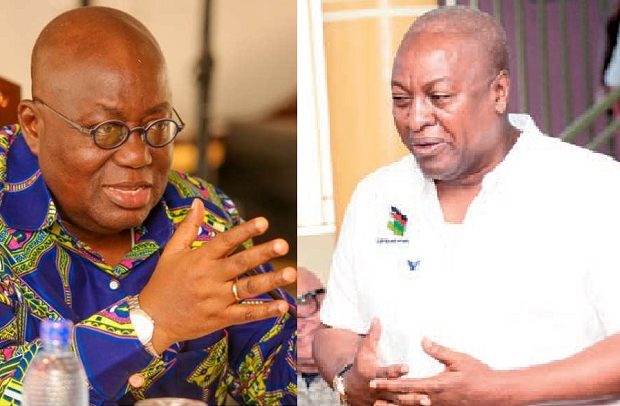 The Economist Intelligence Unit (EIU) has said in its latest report that former President John Dramani Mahama, who is seeking to lead Ghana once again, is not a credible candidate and cannot defeat incumbent President Akufo-Addo.

In its May 13, 2019 Report, the EIU posted that it expects Nana Akufo-Addo and his New Patriotic Party (NPP) to be re-elected, insisting that “it will be difficult for the NDC under Mr. Mahama to portray itself as the better custodian of Ghana’s economy, especially as the country’s growth outlook is fairly strong.”

The report, apart from other factors such as improvement in the economy in the second half of the President’s tenure, revealed that Ghanaians do not find in the NDC’s candidate John Mahama a better alternative to President Akufo-Addo.

According to the 25-page report, “In the presidential election, Mr. Akufo­Addo will face a challenge from John Mahama, Ghana’s president from 2012 to early 2017 who was elected leader of the opposition NDC in February 2019.”

It added that “the 2016 legislative election was won by the NPP; the campaign was dominated by the faltering economy, which many Ghanaians still associate with Mr. Mahama. Accordingly, we therefore expect Mr. Akufo-Addo and the NPP to secure re-election in 2020.”

President Akufo-Addo, in one of his recent engagements, said the track record of his administration would be the deciding factor in the next elections, something which ties in with the forecast of the EIU.

For the EIU the trump card for the opposition NDC lies in its ability to present a coherent opposition and to take on unfulfilled promises as in the area of unemployment and industrialisation.

It said “however, if the NDC can present a coherent opposition and hold the NPP to account on unfulfilled campaign promises — particularly on job creation and industrialisation, where progress has been generally slow and success patchy — the election could be closely contested.”

Per the analysis, the NDC flag bearer has a Herculean task in convincing Ghanaians about what else he and his team can do better than when he was at the helm.

His promises are largely regarded as ruses by most Ghanaians currently.

“It’s early days yet to expect a major turnaround in the economy, especially in the area of industrialization since the infrastructure must be put in place before such major transformation. The railway and road infrastructure neglected for the many years when the NDC was in power are now being tackled. The dividends should be visible by mid next year or even before then,” an analyst told DAILY GUIDE.

The EIU said that corruption is yet to receive the requisite treatment Ghanaians expect since the appointment of Martin Amidu as Special Prosecutor is yet to register any positive outcome.

“Progress has not yet been reported, but pressure to reduce corruption will rise ahead of the 2020 elections,” the report revealed, adding “failure to address this issue could weigh on voter confidence in the political system, although such grievances are relatively low-level.”

The EIU posted a positive outlook for the country’s political stability in the coming years despite what it termed as “an acrimonious party-­political landscape” with the two dominant parties – NPP and NDC – at each other’s throat.

Continuing, the report stated that intimidation and violence between supporters of the two parties would not lead to unrest or breakdown of law and order.

“Ghana’s underlying political stability is expected to endure over the forecast period, despite an acrimonious party­political landscape. The two dominant parties — the ruling New Patriotic Party (NPP) and the National Democratic Congress (NDC)—have alternated in power since the return of multiparty politics in 1992, and their rivalry will remain the key feature of the political scene.”

“These are likely to continue, although such incidents are very limited outside election campaigns, and are not expected to lead to broader unrest.”