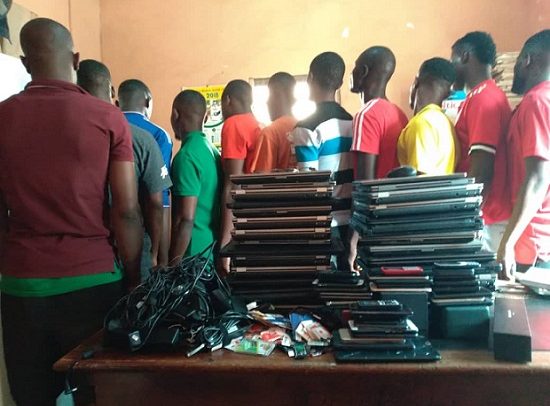 The suspects in police custody

A total of 23 Nigerians suspected to be engaged in cyber fraud at Pokuase and its environs have been apprehended in a swoop by personnel of the Amasaman Divisional Police Command in Accra.

The suspects, aged between 18 and 35, were arrested in a three-bedroom rented apartment at Pokuase ACP Junction area.

Two of them were also caught smoking substances believed to be Indian hemp.

Briefing the media, the Amasaman Divisional Police Commander, Chief Superintendent Francis Yiribaare, said the operation was carried out at 6:45 am yesterday upon intelligence to rid the area of criminals.

He said the suspects rented the three-bedroom apartment to carry out their nefarious activities.

“The police gathered that the suspects often leave the house in the night and arrive every morning to sleep, and residents do not actually know the work that they do.”

The divisional commander averred that initial reports indicated that suspects were part of a robbery gang that has been terrorizing residents of the area, but no deadly weapons were found on them upon their arrest.

The suspects, he said, had been detained while the items had been seized for further investigations.

The police chief disclosed that efforts were being made to contact the landlord to assist in investigations.