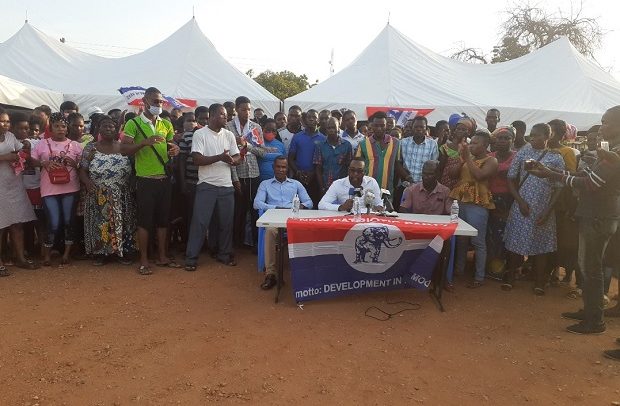 About 300 members of the National Democratic Congress (NDC) in the Keta Constituency of the Volta region have defected to the New Patriotic Party (NPP).

The defected NDC members, who were drawn from Vui, Dzelukope-Afugo and Dzelukope-Amugo Electoral area observed that, supporting the NDC has not brought them much development and hope as they had always desired, hence decided to join the NPP who have shown more commitment to developing their constituency.

This came to light when the Keta NPP inducted the new members in a brief ceremony in Keta last Monday, November 23, 2020. The evet which was hosted by the NPP Parliamentary candidate for Keta, Dr. Benjamin Sena Dzameshie attracted a large crowd including members of the opposition NDC who could not believe that their comrades had abandoned their cause.

The leader of the defected, Delali Alexander Akafia popularly known as Dr. Gray recounted that having been staunch members of the NDC since 1992 (28 years) who have toiled tirelessly for the NDC throughout its 16 years in government and 12 years in opposition, they have nothing to show for it as a people.

He said although they have been made to believe that the NDC is their party and one that has the region and constituency at heart, it has become clear that just the few who were constituency executives and had connections at the top benefited from the NDC. “When in power, the NDC served as a vehicle for some to enrich themselves, while life was unbearable for us who the party claimed to be working for,” he lamented.

He expressed disappointment in the NDC MPs who have led them since 1992 saying, all they knew was to sweet talk them to win elections and abandon the people because “Keta and Volta Region is the ‘World Bank’ of the NDC.” MPs that have represented them include Dan Abodakpui (1992-2008), Richard Agbenyefia-Lassey (2008-2012) and current MP, Richard Quashigah (2012 to 2020).

The NDC has presented another candidate, Dzudzorli Kwame Gakpey with the hope of amending the broken relationship, however, the leader of the defected, Dr. Gray believes a vote for the NDC candidate is a vote for another round of retrogression, abandonment and underdevelopment.

He has therefore expressed confidence in the NPP candidate, Dr. Sena Kwame Dzameshie who has demonstrated empathy, competence and his willingness to support the youth to acquire skills to enhance their future.

Apart from being the right man to represent the best interest of the people of Keta, the development being experienced in Keta under the NPP government led by President Nana Akufo Addo and his Vice, Dr. Mahamudu Bawumia cannot be over emphasized. 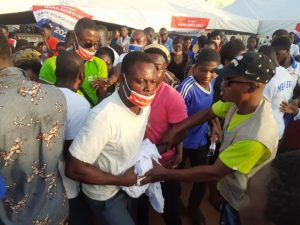 He said “The Free Senior High School Policy which has brought hope to over 3 million school children cannot go unnoticed. The massive infrastructural development ongoing in the various secondary schools in the Municipality cannot also be swept under the carpet. The construction of the Keta Port at Kedzi and the landing beach at Keta Central is a plus for the people of Keta and its environs. It will create 1000’s of jobs for the teaming unemployed youth in Keta and its environs.”

These are things that John Dramani Mahama and the NDC has failed to do for Keta, Dr. Gray noted. He stressed that “In light of these, we have voluntarily pledged our unflinching support to vigorously campaign and make sure the ruling New Patriotic Party (NPP) retains power for His Excellency the President, Nana Akufo Addo to continue with his good works for the people of Ghana and also vote massively for Dr. Benjamin Sena Dzameshie as the next MP for Keta.”

The NPP parliamentary candidate, Dr. Dzameshie who welcomed the new members to the fold hinted that, another 200 NDC members are on the verge of defecting. He appealed to the people of Keta to choose development over affiliation.