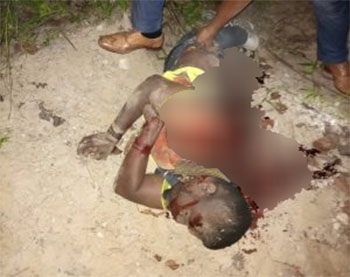 A taxi driver identified as Ibrahim Owusu popularly called “Culture” was on Tuesday 12, January 2021 allegedly shot and killed by some unidentified gun-wielding assailants at Mmotiakrom, a community in the Upper Denkyira East Municipality of the Central Region.

The assailants, after allegedly killing the driver made away with the vehicle.

According to the Assemblymember, Kwame Nsowaa Salvation, it was a suspected robbery attack, adding, the deceased, a popular commercial chauffeur in Dunkwa must have been engaged by the assassins, who later shot him in the chest, killing him instantly.
“ I was informed of a robbery attack in my electoral areas, so I quickly informed the NADMO Director Alhassan Yakubu and made an official report before heading to the scene”.

“People also told me they heard the gunshot that night and rushed to the scene to see the body of the victim in a pool of blood”, he narrated.

Mr. Alhassan said the dead body was identified by one CID officer who revealed that the Taxi driver was stationed at Dunkwa.

Some Police Officers from the Dunkwa-Offin Divisional Police Command have since visited the scene and conveyed the mortal remains of the deceased to the Municipal Hospital morgue in Dunkwa-Offin, where an autopsy is expected to be carried out.

In the meantime, the Police have appealed to the general public to assist with information that could lead to apprehending the perpetrators of this heinous crime.

Prove Or Retract Your Allegation – GBA To Muntaka