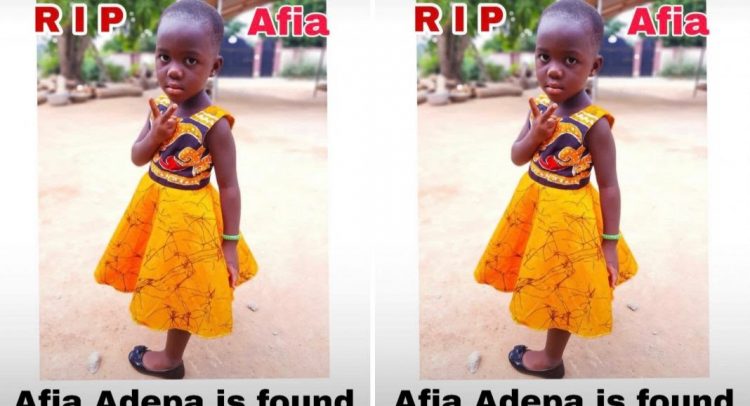 Information gathered by DGN Online indicates that a 4-year-old girl, Benedicta Owusu Sarpong, who was reported missing on April 27, 2021, at Offinso in the Ashanti Region has been found dead.

The late Benedicta was found in a refuse dump with the head and other body parts missing.

Narrating the incident on Twitter, one Jilo Nketiah said the family of the deceased have identified the body as that of their daughter who had gone missing about a week ago.

“The girl also named Afia Adepa was found in the clothes she was last seen wearing, 4-year-old girl that went missing in Offinso last week was found dead at a refuse dump today. WHAT THE HELL IS GOING ON?”

“She was found beheaded. The family identified her by the clothes she was wearing when she got missing. Bro something needs to be done about all these disappearances and kidnappings. It’s getting out of hand,” he added.

Some residents in the Offinso community have suggested that the deceased might have been murdered for money ritual purposes.

They have charged the Ghana Police Service to ensure that they tighten security in the various communities across the country.