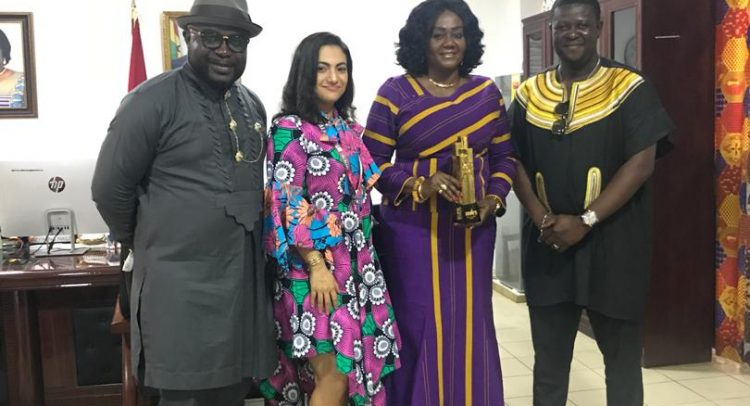 The minister (3rd L) with the 4syte team

Officials from 4syte TV has paid a courtesy call on the Minister of Tourism, Hon Babara Oteng Gyasi at her office.

The visit was to officially invite her to the MTN 4syte TV Music Video Awards scheduled for November 16, 2019, at Kempinski Gold Coast City Hotel in Accra.

The minister was excited to receive the 4syte TV team that included General Manager Mohammed Alhassan, Head of Markeing Nana Tweneboa-Kodua and Jihane Chagraoui aka Jiji, who is in charge of this year’s Red Carpet session.

The Minister congratulated 4syte TV on their 10th anniversary for the awards and for their support to the Ghana music industry.

The Member of Parliament for Prestea Huni-Valley indicated that she is a fun of 4syte TV and the ministry will be working together with the station to promote Ghana’s tourism, culture and creative arts.

The General Manager expressed profuse thanks to the Minster for her warm reception and revealed that the doors of 4syte are always opened to the Ministry and used the opportunity to reveal the new golden plaque for the awards to the minister.

During the interaction Jiji mentioned that for the first time 4syte TV is introducing an afternoon Red Carpet event aimed at ensuing that the media and bloggers get quality pictures and videos from the event.

“This year the Red Carpet starts from 3pm to 6pn, while the awards gala starts from 8pm,” he added.

NDC Pushes For ‘No’ Vote In DCE Election