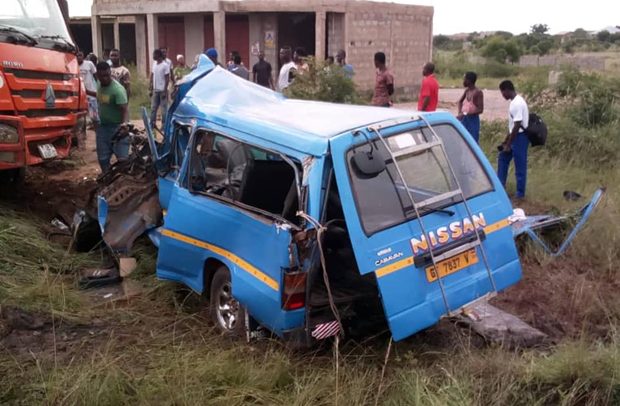 The scene after the accident

AT LEAST six passengers are in critical condition after a tipper truck loaded with laterite reportedly crashed into a commercial Nissan mini bus at Appolonia in the Kpone-Katamansu District of Accra.

The injured persons were rushed to the General Family Hospital, a private health facility nearby and the Dodowa District Hospital for immediate medical attention but no casualty was recorded at the time of filing this report.

According to an eyewitness, the Nissan mini bus with registration GT 7837 V was traveling towards Appolonia while the tipper truck with registration number GE 4272-17 was coming from opposition direction when the accident occurred.

The witness continued that the driver of the tipper truck was said to be over-speeding and veered off its lane to that of the bus, indicating that the mini bus driver upon sensing danger decided to divert into a nearby bush in an attempt to escape crashing but the tipper truck followed and crashed into it.

Some good Samaritans assisted in taking the injured passengers onboard the bus to the health facility.

The incident attracted scores of people to the scene with some attributing the cause of the accident to the tipper truck driver.

Interestingly, the driver of the tipper truck put off the ignition after the accident and left the scene, leaving the injured persons to their fates.

MASLOC Funds For Chereponi Can't Be Accessed Over Conflict - Bawumia