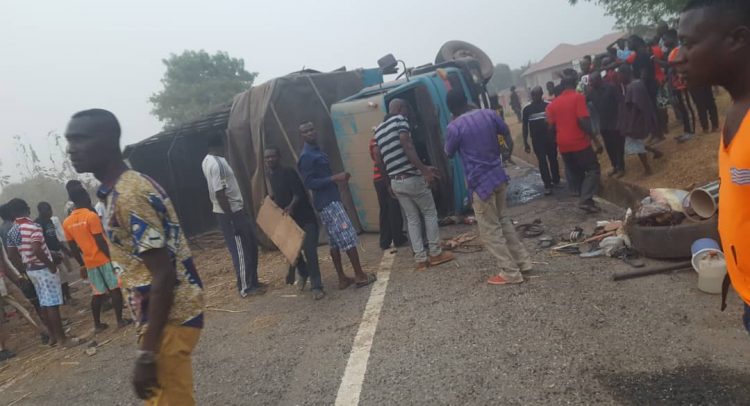 Nine persons have been confirmed dead after a tragic road accident at Monkra in the Krachi-West District of the Oti Region last Saturday.

The accident which occurred in between Dambai and Kete-Krachi also saw about 51 sustaining injuries.

According to witnesses, the accident involved a KIA Rhino truck which was conveying about 67 passengers including students of the Seventh Day Adventist School from Osramani to Gyasayo, near Kete-Krachi.

They were returning from the funeral of their headmaster, Theophilus Yaw John, at Osramani when the accident occurred.

One of the surviving victims identified simply as Vivian is reported to have said that upon reaching Monkra, a passenger pleaded with the driver to stop so she could attend to the call of nature.

However, in the process, the truck skidded off the road and subsequently summersaulted.

He said “when the vehicle got to the Monkra Junction, the driver realized that there was a mechanical defect, so he veered off the road and the vehicle turned on the other side. On the spot, three were reported dead and 57 were sent to the hospital.”

“As we speak, six of them have also died bringing the death toll to nine. The others have been admitted and are receiving treatment,” he added.

The dead bodies have been sent to the Kete-Krachi District mortuary with those in critical condition receiving treatment at the same facility.