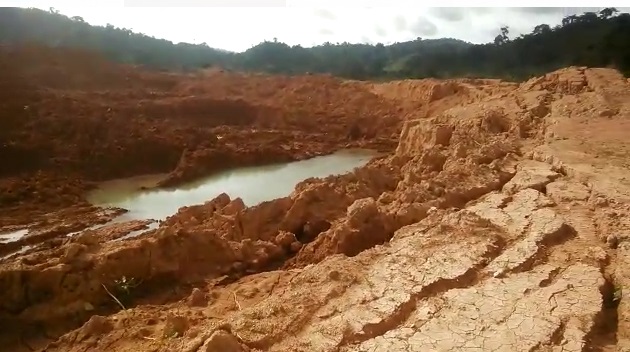 Nine persons have been confirmed dead, while search is still ongoing after a downpour flooded mining pits at Gbane, a gold mining community in the Talensi District of the Upper East Region.

The deceased aged between 21 and 53 who were said to be among some small scale miners in the mining pits, were trapped after Monday, May 31, 2021, heavy rains in some parts of the Upper East Region.

A rescue operation team comprised the Ghana Police Service, the National Disaster Management Organization (NADMO), the Small Scale Miners Association and the Shaanxi Mining Company Limited spent about 48 hours on the site and were able to retrieve the nine persons who were all confirmed dead.

Public Relations Officer of the Upper East Regional Police Command, ASP David Fianko-Okyere, who confirmed this to the media noted that efforts were still underway to rescue the rest of the people trapped underground.

According to the PRO, the initial information gathered from the small scale miners indicated 13 persons had initially gone underground, however, six who had information about the heavy rain and windstorm were able to retreat and got out of the pit before it got flooded.

ASP Fianko-Okyere noted that it was possible that the survivors had the number wrong as nine persons were already retrieved and added that the rescue operation was still ongoing to be certain.

“In fact, out of the 13, six were able to come out alive themselves when they heard that the wind and rain was heavy because at that time they had not gone deep.

“They said they shouted for their colleagues who were down to come out but they could not hear and so per their information seven persons would have remained in the pit but when we got there, we were able to retrieve nine, meaning that they did not have the right number of people and that is why the search is still ongoing,” he said.

The PRO explained that information gathered from the small scale miners attributed the disaster to the downpour coupled with windstorm.

He also identified the place as a low lying area which could have caused the place especially the pits to flood so easily.

Meanwhile, Upper East Regional Minister, Stephen Yakubu, who visited the site said a Committee would be formed to investigate the cause of the accident.