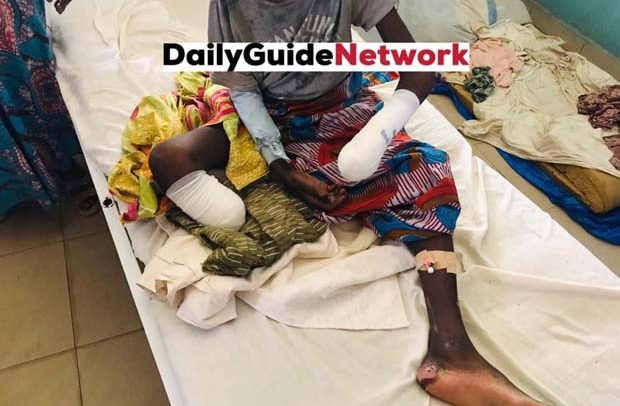 The allegation of inaction levelled against the North East Regional Police Command in the case of a 14-year-old boy who was sprayed with acid has been contradicted by emerging details from law enforcement.

Gideon Wunduwa, father of the hospitalised boy, who is a civilian employee with the Ghana Police Service, according to the police rather went to the regional commander to have the case settled out of officialdom because suspects in the case made a monetary proposal so the matter will be doused.

The regional commander, who would not allow the case to take that turn, insisted that the law must take its course having already arrested two suspects.

The police have expressed surprise that the father would turn round to accuse them of inaction when indeed he is the one using some traditional rulers and monetary influence to have the case dampened, which he turned to the media and the Commission on Human Rights and Administrative Justice (CHRAJ).

DAILY GUIDE has sighted a report which indicates that it was rather the police who after picking the boy and sending him to hospital, informed the father about the incident.

The police action was prompted by a distress call they received about the boy after the acid attack.

The Regional Commander, DCOP/Mr. Moses Ali, has said that his outfit will ensure that the little boy is served justice.

Salifu Ibrahim, 39, a teacher of the Nalerigu Senior High School, Inusah Wadudu, 18 and Inusah Mohammed, 28, both farmers, are suspects in the case.

Upon the instructions of the IGP/Dr. George Akuffo Dampare, they were rearrested and detained after a bail was granted them earlier, and put before the Nalerigu Magistrate Court.

They were remanded in police custody to reappear in court on May 30, 2022.

A plastic container with a liquid content believed to be acid and found in the house of the suspects has been forwarded for forensic examination.

The boy is currently battling for his life at the Baptist Medical Centre at Nalerigu in the North East Region.

The 14-year-old boy was accused of stealing a bicycle, and was said to have been sent to a hideout where he was allegedly tortured before the acid was poured on his hand and leg.

The police moved in quickly to pick the boy and sent him to the Nalerigu Baptist Medical Centre, where he is currently on admission having had an arm and leg amputated.