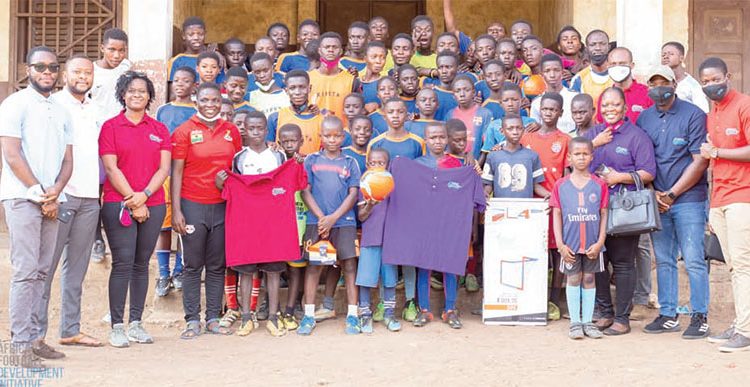 Some of the staff of AFDI, Fortunes Academy and the players in a pose

The African Football Development Initiative (AFDI) has supported Fortunes Soccer Academy with football equipment worth thousands of cedis at Adabraka in Accra.

According to the staff of AFDI, the gesture was in fulfillment of a promise made to the academy.

“The African Football Development Initiative strongly believes in the creed that the difference between where he is now and greatness is a virtue called patience and a gift called opportunity,” Gilbert Monney, lead strategist for AFDI, said.

He added that the creed has prompted AFDI to be committed to seeing many young football talents realise their full potential.

Fortunes Soccer Academy is made up of several amazing young talents determined to make the best out of the game of football despite the many challenges that confront them.

This gesture was a sign indicating the personal commitment of AFDI, which is aimed at sending help to deprived football communities across Africa and helping young talents live their dreams in the game.

He added, “We would like to thank all who made today’s event successful. We will continue taking our help to every corner across Africa in order to help develop talents in deprived communities.”

The coach of Fortunes Academy, Linda Prah, expressed appreciation to the staff of AFDI for the support.