AIDS Kills 932 In First Half 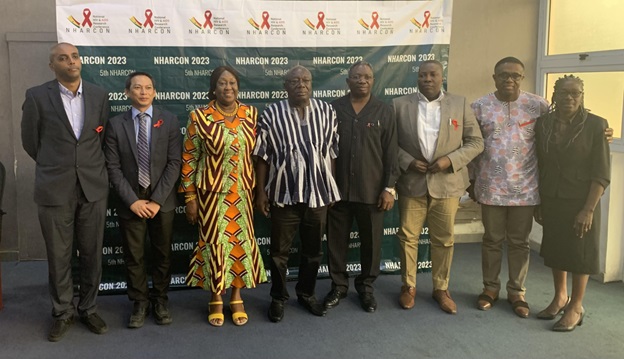 Dignitaries at the event

The National AIDS Control Programme (NACP) has indicated that 932 people died of HIV/AIDS in the first six months of 2022.

According to the NACP Programme Manager, Dr. Stephen Ayisi Addo, the number was from the current 259,408 people living with HIV who are on treatment.

He noted that there are over 101,500 people who are yet to be identified, adding that the country’s dream of achieving epidemic control remains a mirage.

“I announced just a week ago that 23,495 persons tested HIV positive (3.6% male and 2.2% female) in the first six months of this year. This is in excess of the estimated 19,000 new infections annually and lower than the previous year’s positive yield of approximately 25,000,” he said.

Speaking at the launch of the National HIV and AIDS Research Conference (NHARCON- 2023) in Accra, Dr. Addo said the country has progressed towards achieving the global 95.95.95 WHO-UNAIDS targets at 71-99-79, as at December 2021.

He, however, indicated that without evidence and real time data collected and disseminated to the people, it will be impossible to achieve the goals.

“Prevention of HIV is impossible if we do not regularly update our target population with information generated about them. We must therefore prioritise and fund dissemination and learning fora such as NHARCON as part of our prevention initiative to enable us realise our dream of achieving epidemic control,” he said.

Director General of the Ghana AIDS Commission (GAC), Dr. Kyeremeh Atuahene, indicated that the resources, expertise and commitment invested in the national HIV response have yielded some dividends as the country has witnessed sustained low prevalence and increased treatment uptake, which is keeping persons living with HIV alive, strong and healthy.

He, nonetheless, stressed that efforts to reduce new HIV infections would not succeed without the provision of high-impact services that address infectious diseases – HIV, TB, COVID-19, Viral Hepatitis, STIs and non-communicable diseases such as diabetes and cardiovascular diseases.

NHARCON is organised once every four years to consolidate the national HIV research effort and to make the evidence thereof a centre piece in national programmes and policies.

It provides a platform for partners and stakeholders to share scientific evidence and best practices in support of the national response to HIV and co-morbidities.

Attorney General Sponsors 5 Lawyers To Study In The US