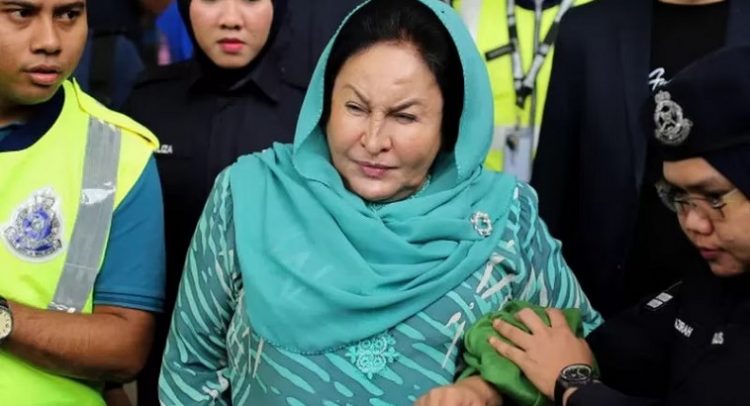 She was found guilty of three counts of receiving and soliciting bribes.

The charges carry a penalty of up to 20 years in prison, and a fine of up to five times the amount of the bribe.

However, she was found guilty on Thursday by a High Court on the aforementioned charges.

The judgement comes days after her husband Najib began serving a 12-year jail sentence for corruption.

Rosmah, 70, is known for her love of luxury goods and jewellery. When Malaysian police raided the couple’s properties in 2018, they found a $1.6m gold and diamond necklace, 14 tiaras and 272 Hermes bags.

She sat quietly in the dock as High Court presided over by Zaini Mazlan delivered the verdict on Thursday afternoon.

“I must admit that I’m very sad with what happened today,” she said tearfully to the judge after the verdict was delivered, according to a Reuters report.

The Kuala Lumpur court began mitigation on Thursday afternoon, ahead of sentencing. It is unclear when she will start serving a prison sentence, as her legal team could launch a lengthy appeals process.

Rosmah still faces 17 other charges of money laundering and tax evasion. She has pled not guilty to these charges.

Malaysia’s $4 sandals vs Birkin bags
Prosecutors claimed Rosmah had sought a bribe of 187.5m ringgit and received 6.5m ringgit from an official of a company that won the bid for the solar energy project, which was worth 1.25bn ringgit.

She had earlier argued that she was framed by her former aide as well as other officials involved in the project, but the judge called her defence “bare denial and unsubstantiated”.

Her legal team had also filed a last-ditch application on Wednesday to get the presiding judge recused. They argued that an alleged leaked document which stated that her guilty verdict had been decided ahead of time had left her with no faith in the judge’s ability to hear the case fairly.

But Judge Mazlan dismissed the recusal application, saying the prosecution had proven their case beyond a reasonable doubt.

Few people have been more vilified in Malaysia than Rosmah Mansor, who flaunted her love of luxury clothes and jewellery, and was known to exert a strong influence on her husband’s decisions.

When the police raided the couple’s home in Kuala Lumpur after Najib’s shock election defeat in May 2018, and came out wheeling shopping trolleys piled high with 284 designer handbags, still in their boxes, some costing many thousands of dollars, Rosmah’s reputation as a Malaysian Imelda Marcos, or even a Lady Macbeth figure, was fixed in the public’s imagination.

She and Najib have rarely been seen together since their fall from power.

She has kept a low profile even as she used the four years that her trials and appeals have taken to rebuild his image as a champion of the Malay community, campaigning relentlessly as his party UMNO recovered much of its political support base since the election.

But there has been plenty of damaging testimony by witnesses in Najib’s trials – they said he spent heavily on jewellery for her, and that she was the crucial contact that allowed Jho Low, the fugitive financier accused of masterminding the massive 1MDB scandal, easy access to the prime minister.

Exactly how big Rosmah’s role was in the scandal is still unclear, but she has become an easy figure to hate, and few will mourn her criminal conviction.

Najib and his wife are at the centre of a sprawling investigation spanning six countries over their alleged involvement in state-owned wealth fund 1Malaysia Development Berhad (1MDB).

1MDB, set up by Mr Najib in 2009 during his tenure as premier, was meant to turn Kuala Lumpur into a financial hub and boost the economy through strategic investments.

But it started to attract negative attention in early 2015 after it missed payments for some of the $11bn it owed to banks and bondholders.

In 2020, a court found Najib guilty on seven counts – centred on a total of 42m ringgit which was transferred from SRC International – a former unit of 1MDB – into his private accounts.

He was sentenced last Tuesday to 12 years’ jail and a fine of 210m ringgit.

AIDS Kills 932 In First Half