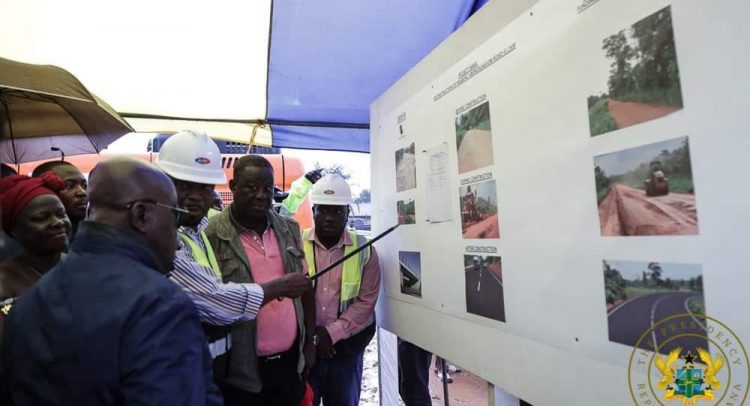 President Akufo-Addo being taken through the project by the contractor

As part of his two-day working visit to the Eastern Region, President Nana Addo Dankwa Akufo-Addo, has cut sod for the reconstruction of Kwabeng-Abomosu-Asuom road.

The contract for the 41.4km road project was awarded to First Sky Limited, a first class local construction firm at the cost of GH¢144,936543.44.

It has 36 months to deliver on the road that leads to major cash crops like cocoa, as well as food crops producing area in the Eastern region.

The President broke the ground to symbolised the commencement of construction after the Executive Chairman of First Sky Group, Eric Seddy Kutortse, took him through the drawings, assuring that the project will be completed ahead of time.

Heavy duty machinery had already been deployed to the site with work progressing steadily.

The project which commenced in August 2019, according to the contractor, has recorded about 30 percent job done.

Even though heavy downpour prevented the President from addressing the gathering, he expressed satisfaction with output of the First Sky.

President Akufo-Addo’s visit to the region was dominated by road inspection as most of the roads in the region have deteriorated over the years.

The President also inspected some ongoing works on the 10 kilometres roads in Nkawkaw.

Eastern Regional Minister, Eric Darfour, briefing the President on the inspection tour, said about 3.40 kilometres of roads in the area were deteriorated, with the existing paved roads requiring improvements, including minor realignment, widening, construction of drainage structures, and surfacing, whilst 6.60km are unpaved roads requiring construction.

The Regional Minister told the President that the road projects were being undertaken by Messrs Berock Ventures Limited, with a contract duration of 27 months, with an expected completion date of 21st March, 2020.

President Akufo-Addo urged the contractor to ensure that the town roads were completed on schedule.

In all, the Department of Urban Roads is undertaking the rehabilitation and maintenance of some 153 kilometres of roads in the Region.

These projects are being undertaken at an estimated cost of GH¢ 387,650,853.08, with contractors having commenced work on all the projects.

“Posterity Will Applaud You For Free SHS, 1D1F” – Kumawu Omanhene To Akufo-Addo