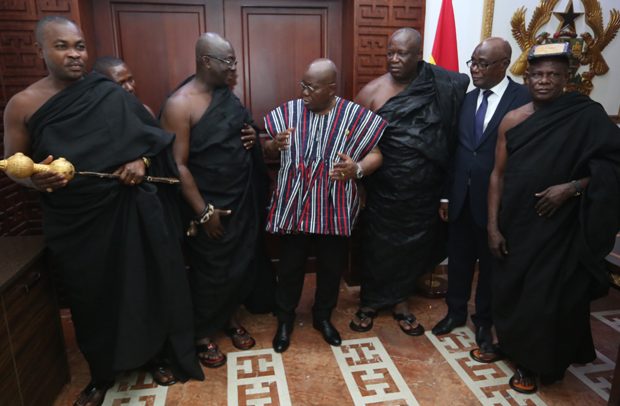 President Akufo-Addo commiserating with the delegation from the Ashanti Region to announce the funeral arrangement of Nana Akwasi Agyemang. Picture by Gifty Ama Lawson

The remains of former Metropolitan Chief Executive (MCE) of Kumasi, Nana Akwasi Agyemang, an Asante royal, are set to be interred on February 24, 2020.

It follows an announcement by his family and a delegation sent from the Manhyia Palace in Kumasi to the Jubilee House, Accra, on Wednesday on the instructions of the Asantehene, Otumfuo Osei Tutu II.

The late Akwasi Agyemang, who was famously known as Okumkom, died on January 14, 2020 in Kumasi at the age of 86.

The Senior Linguist at Manhyia, Baffour Kantankrakyi, who led the delegation to the Presidency, said on February 24 the casket containing the remains of the late royal would be opened from 6 am for public viewing and around 2 pm, Otumfuo would sit in state and exchange pleasantries with those who would come and mourn with him.

He said the burial service would be held at St. Anns Church on the same February 24, 2020 and the body would be interred at the Breman Royal Mausoleum.

The delegation commended the President for attending the one week observance of the passing of Akwasi Agyemang and stressed the belief that he would make time to attend the final funeral rites. He presented four bottles of aromatic Schnapps and two bottles of Whisky to the President.

Akwasi Agyeman was a member of the Oyoko Royal Family and is one of the longest-serving MCEs of Kumasi. He has a long political history dating back to 1977 during the Supreme Military Council government of late Ignatius Kutu Acheampong where he served as chairman of Kumasi Metropolitan Assembly (KMA).

He subsequently went on to serve as MCE under two other Heads of State, Dr. Hilla Limann and Flt. Lt Jerry John Rawlings. He became a close confidante of the latter.

He was appointed Deputy Minister of Science and Environment under Rawlings’s regime and was once considered a leading contender for the vacant Asante Stool following the demise of Otumfuo Opoku Ware II in 1999.