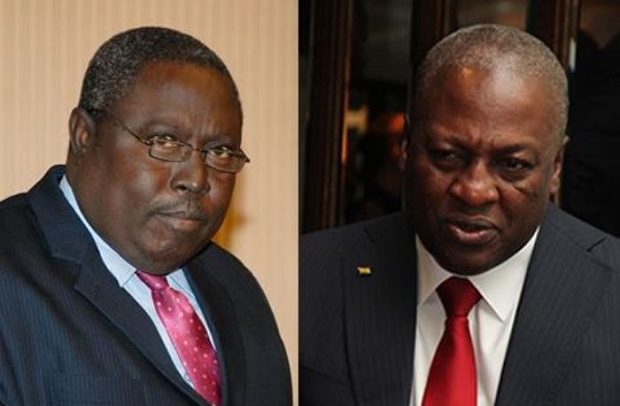 He reacting to the Special Prosecutor’s report on the Airbus scandal which says he (Mahama) is Government Official 1.

Speaking to students at the University of Ghana on Tuesday, November 3, 2020, as part of his campaign tour of the Greater Accra Region, Mr Mahama called Mr Amidu “a coward” who indicted him out of fear and without sound legal basis.

“Amidu goes and present Agyapa shares, Agyapa investigation and I thought he was man enough,” he said.

“But in the Agyapa report, you know that it’s going to be damning of this Government, you go and put one paragraph there about Airbus. Nobody ask you about Airbus. If you were man enough, present Agyapa, and do a report on Airbus separate and then I will come as a man and answer you on Airbus. If you think I am indicted on Airbus, accuse me directly. But because he is a coward and he knew they were going to discuss Agyapa, so put a paragraph on Airbus to equalize the discussion. I mean, what stupidity is this,” he added.

“You are investigating Agyapa, present a report on Agyapa,” according to Mr Mahama.

He said Mr Amidu was afraid to focus solely on the Agyapa gold royalty deal because he had indicted the Finance Minister, Ken Ofori-Attta, saying “I thought he (Amidu) was man enough.

What Amidu Says In His Report

It would be recalled that in his report, Mr Amidu referred to former Mr Mahama as the elected Government official one in the Airbus bribery scandal.

The report says the Office of the Special Prosecutor, “has established the identity of elected Government Official 1 to be former President John Mahama whose brother of the full blood is Samuel Adam Foster also known as Samuel Adam Mahama.”

According to the report, “the only reason the former President has not been invited for interrogation (in spite of all threats from some of his followers and lawyers) is the fact that he himself got an insurance as the Presidential Candidate of the other largest political party in Ghana and prudence dictated that the interrogation be held in abeyance during this election season.”

It said the former President has also not offered to make any voluntary statement to the Office of the Special Prosecutor despite the publication of an alleged interview containing admissions purportedly made by the former President to a Daily Guide reporter without the full voice recording which in the meantime remains just a hearsay.

European aircraft manufacturer, Airbus is alleged to have bribed Ghanaian Government officials during the late Mills’ administration in which Mr Mahama was a vice president.

Mr Mahama was in charge of the purchase of three aircraft for the Ghana Armed Forces from Airbus and reports indicated that Airbus offered bribe, at least $5 million.