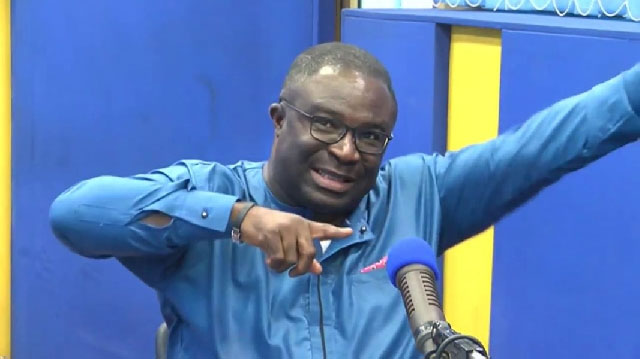 SUBIN MEMBER of Parliament (MP), Eugene Boakye Antwi, has dared those accusing him of not voting for Prof. Aaron Mike Oquaye, during the Speaker of Parliament polls, to face him at the dreaded river deity, ‘Antoa Nyamaa’.

Sounding very angry and panting for breath, the Subin lawmaker, who doubles as the Deputy Minister for Works and Housing, said the New Patriotic Party (NPP) decided that every NPP MP should vote for Mike Oquaye “and I did exactly that”.

According to him, he was therefore utterly surprised that some faceless people had concocted false reports in the media lately to make it seemed that he (Eugene) refused to cast his ballot for Mike Oquaye, who incidentally lost Speaker of Parliament polls.

“I am an Asante man so just give me bottles of schnapps and lets go to Antoa to swear as to whether I refused to vote for Mike Oquaye, who was the NPPs preferred choice for the enviable Speaker of Parliament position,” he challenged on radio.

Eugene Antwi, who claims to be a staunch Roman Catholic member, said for once, he was prepared to set aside his religious faith, which strongly forbids him from cursing with a river deity, and rather curse in order to clear himself from any wrongdoing.

Setting the records straight, he explained that he used pen to thick for Mike Oquaye even though he did not enter the polling booth to cast his ballot, therefore those that were trying hard to lie that he (Eugene) did not vote for Mike Oquaye should stop.

“I used pen to thick for Mike Oquaye and my colleague MPs that were sitting at the right side of the House clearly saw me voting for the NPPs preferred choice to win the Speaker of Parliament position,” the Subin Constituency lawmaker indicated.

He stated that his refusal to enter the polling booth doesn’t necessarily mean that he did not cast his ballot, sternly cautioning the faceless journalists that were fanning blatant lies to dent his hard won image, that they risked being cursed by him.

According to him, the General Secretary of the opposition NDC, Johnson Asiedu Nketiah, was at the gallery of Parliament House, giving instructions to the NDC members to follow, but sadly the NPP leadership was missing in action at that crucial time.