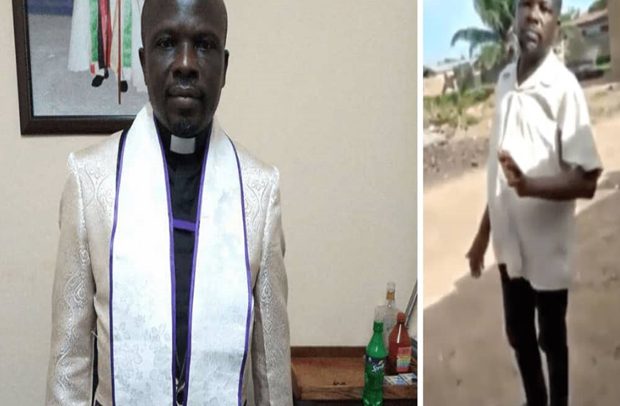 The founder of King Jesus Evangelistic Ministry International was found dead at his residence at Adom Estates, Kasoa, in the Central Region.

Prophet Eric Amponsah (Computer Man), who is also the leader of Hope Generation Ministry, confirmed his unfortunate demise to NEWS-ONE on Wednesday.

The cause of his death is, however, yet to be confirmed.

‘Apraku My Daughter’ was once a popular evangelist who gained fame across Ghana through his supposed miracles in his church. He also did not only clad himself in good clothes at the time but also owned a number of properties in Accra.

Somewhere at Teshie Agbliza, a suburb of Accra, a road is named after him.

A recent video of him which surfaced on social media leads to allegations that the man of God had given up on Christianity.

He was caught looking drunk in the viral video recorded by an unknown lady who alleged that he took money from her to pray for her but failed to.

In the video, the man of God who was also a singer was shabbily dressed and heavily drunk. He looked lost and didn’t where he was going.

He even threatened to beat one of the ladies if she did not stop recording the video. He was also spotted making gestures and speaking in an incoherent manner.

The video has come out at a time a number of Ghanaian men of God are facing a plethora of allegations that most of them are into occultism and not doing the work of God as they claim.

The Member of Parliament (MP) for Assin Central, Kennedy Agyapong, has sworn to expose some of these men God he tagged as “fake”. He has since devoted The Seat, a show on Net2 TV, for that purpose.

In one of the discussions about fake men of God on the show, Apraku’s name was mentioned, but not much was said about him in that regard.

I Am Not Dead - Actress Victoria Mensah