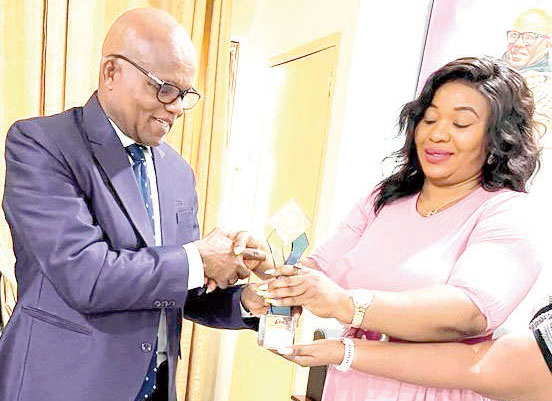 Dr. Ato Arthur receiving his award at the function

Dr. Nana Ato Arthur, Head of the Office of Local Government Service (OHLGS), has been recognised as one of ‘Africa’s Top 50 Public Sector Leaders’ by the Africa Public Sector Conference and Awards (APSCA) 2022.

The National Association of Local Authorities of Ghana at its just-ended Congress in the Ashanti Region also presented a Citation of Honour to Dr. Nana Ato Arthur in recognition of his contribution to the progress of the Local Government Service (LGS).

The LGS was also recognised and awarded for its Excellence in Local Government Service Delivery by APSCA.

The APSCA was established in 2018 and organised by Instinct Wave; the 2022 edition was the 4th in a series held at the Kempinski Hotel in Accra.

Other institutions and awardees who also received the awards were from Nigeria, Kenya, Liberia and other parts of Africa.

His vision of ensuring that the LGS get a befitting office infrastructure has culminated into a reality with the construction of a state-of-the-art Head Office for the Service, which is about 90 per cent complete, as well as multi complex Human Resource Centre at Akumadan in the Ashanti Region.

Dr. Ato Arthur’s leadership style has made intimidation and conflicts between assembly staff and political authorities at the district level a thing of the past.

His introduction of new units such as the statistical unit and revamping of the client service units at the assemblies has strengthened service delivery at the local level.

Ing. Dr. Nana Ato Arthur has transformed the LGS into a world class service-oriented institution to the admiration of all in the last five years.

Certain bureaucracies that inhibited the operation of some administrative procedures such as promotions, conversions, upgrades, transfers and postings have all been eliminated, making these procedures as easy go to by.

The LGS has now become the envy of many to the extent that staff of other public institutions clamour to join the service.