As part of activities to commemorate the 10th anniversary of the passing of former President John Evans Attah Mills, a book on his speeches will be launched on Thursday, September 29, 2022.

The book will cover speeches made at notable gatherings and on key issues relevant to the country and the world while he (Atta Mills) was alive and serving as President.

The Volta Region’s Council of State member, His Eminence Francis Nyonyo Agboada is expected to launch the book during a public lecture to honour the former President at the Cedi Auditorium of the University of Health and Allied Sciences (UHAS), Sokode Campus.

The Governing Board of the John Evans Atta Mills Memorial Heritage announced this during a recent press conference in Ho, the Volta Regional Capital.

The lecture which will be delivered by the founding Vice Chancellor of UHAS, Prof. Fred Newton Binka will be on the theme; “The Man John Evans Atta Mills -Ten Years On.”

Mr. Kludjeson said UHAS was an appropriate venue as it was started by President JEA Mills during his tenure, a testament of how visionary he was.

He described the former President as peace loving. “The Asomdwehene or the peace man as he was called, was noted for all his zeal for creating a better Ghana for all of us and his restless quest for excellence and integrity were unmatched in ensuring that Ghanaians have nothing but the best,” he said.

More so, he was an illustrious son of Ghana, an educator, a sportsman and a person of virtue; whose demise unified the country irrespective of one’s political persuasion.

It is for this reason that the JEA Mills Memorial Heritage is committed to inspiring humanity for a better society, building and projecting the JEA Mills’ modelled servant-leadership values and views of society to cause positive action in strengthening democratic values and human advancement.

He was hopeful that the lecture will attract people from all walks of life, including academia, religious leaders, politicians, industry, students, and traditional authorities. 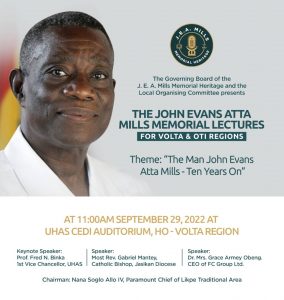