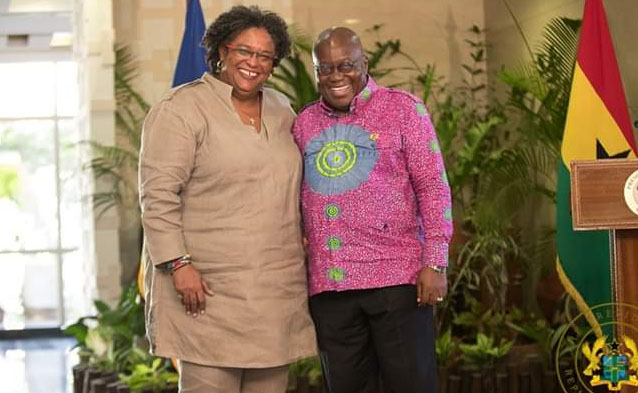 All is now set for the recruitment of 120 Ghanaian nurses for work in Barbados as a means of addressing the shortfall in the number of health workers on the Island nation.

To this end, the Foreign Affairs ministers of Ghana and Barbados have signed an agreement on behalf of their respective nations.

The signing was done at the Jubilee House yesterday when the Prime Minister of Barbados, Mia Mottley, paid a courtesy call on President Akufo-Addo.

The agreement will set out the framework under which Ghanaian nurses are to proceed to Barbados against the backdrop of Barbadian commitment to existing international protocol on workforce policies, as well as the International Council of Nurses (ICN) Code of Ethics for nurses.

Remuneration is to commensurate with the terms and conditions of Barbadian local registered nurses and the host nation will provide professional support to Ghanaian nurses to comply with the guidelines and rules of the Nursing Council of Barbados.

Thus far, a total of 150 shortlisted candidates have undergone interviews from which 120 will be chosen.

It would be recalled that on 15th June 2019, during an official visit to Barbados, as part of activities to promote the declaration of 2019 as the ‘Year of Return’, President Akufo-Addo, in principle, agreed to a request by Prime Minister Mottley to send some nurses to work in a number of medical facilities in Barbados.

In another development, Mia Mottley, the visiting PM, took exception to what in her opinion were the delays by the United Nations (UN) in carrying out reforms in the Security Council as President Akufo-Addo has often advocated.

The Ghanaian leader had solicited support from Barbados in pushing through the agenda for reforms in the composition of the UN Security Council which President Akufo-Addo thinks is not fair to, especially Africa and its citizens.

After listening to her Ghanaian counterpart, an obviously unhappy Mottley seized the opportunity to vent her frustration, saying “we are with you as one on the matter of reforms of the United Nations Security Council; we are aware that the world as crafted in 1945 were anchored in principles that are immutable that cannot be… as crafted in the rule that informed the composition of the bodies, whether it is the United Nations or the Bretton Woods Institution.”