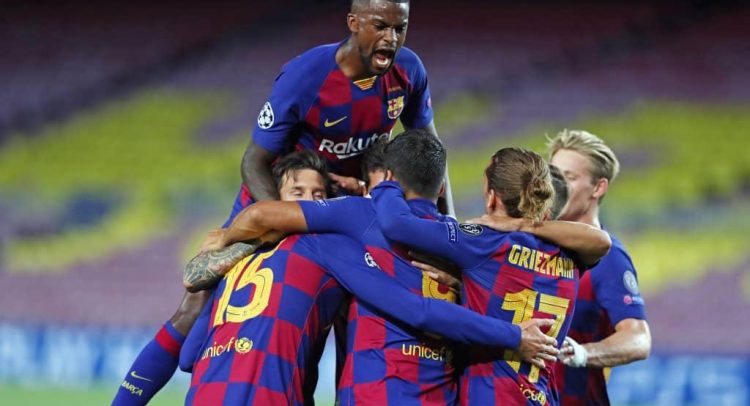 Barcelona have sealed their spot in the quarter-finals of the UEFA Champions League following their resounding 3-1 victory over Italian side, Napoli at the Camp Nou on Saturday night, August 8.

The Spanish giants are to face German side, Bayern Munich in the quarter-finals in Lisbon, Portugal.

Bayern Munich secured a 4-1 win over Chelsea at the Allianz Arena on Saturday night, progressing to the quarter-finals on 7-1 aggregate.

Barcelona made it through on a 4-2 aggregate.

Barcelona took the lead in the 10th minute from a C. Lenglet’s goal, and Lionel Messi doubled in 23rd minute.

Luiz Suarez made it three for Quique Setien’s Barcelona side in the 45+1’minute.

Napoli secured a consolation goal in the stoppage-time (+45+5′) of the first half when L. Insigne converted a penalty.

Away from Camp Nou, Bayern Munich had a wonderful playing time at the Allianz Arena, recording their opener from Roberts Lewandowski in the 10th minute, and Perisic doubling for the German side in the 24th minute.

Tammy Abraham pulled one back for Frank Lampard’s Chelsea team in the 44th minute.

But Bayern continued their dominance of the match and in the 76th minute, C. Tolisso had the opportunity to increase the score to 3-1 for the home team. Lewandowski closed the match with his second goal on the night in the 83rd minute.

Barcelona are scheduled to host Napoli later this evening at the Camp Nou tonight.

Bayern Munich are also to host Chelsea at the Allianz Arena.

Both matches were the second legs of the UEFA Champions League round of 16 knockouts and kicked off simultaneously at 7:00pm.

Napoli went into the match on a 1-1 aggregate.

Chelsea on the other hand were down 3-0 after suffering a humiliating defeat to Bayern in the first leg played at Stanford Bridge.