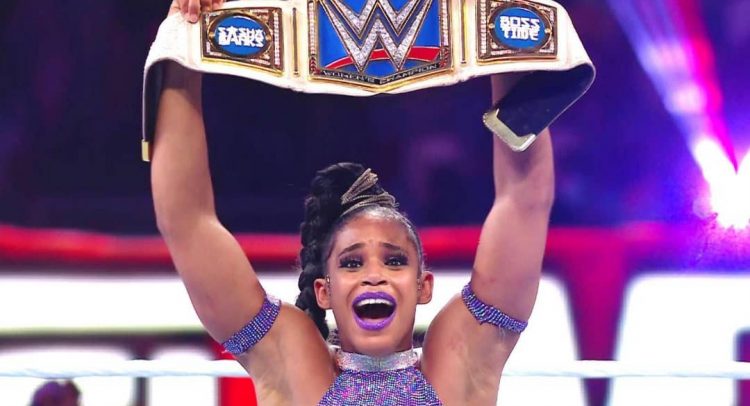 When Drew McIntyre and Bobby Lashley went on first Saturday night with the universal title on the line after a delay due to inclement weather, it was 100 percent clear Belair and Banks would be free to do something special in the main event.
What they did was historic.
There’s a lot that goes into a Mania main event being historic, yet somehow these two found it. They hit the ring bitter rivals, yet didn’t start fighting as soon as the bell rang. Instead, both seemed close to tears given the monumental scene.
The scene being this, as explained by Banks before Mania, according to Abhilash Mendhe of Sportskeeda: “But this is the first time ever that two African-American women will be headlining [breaks into tears] a WrestleMania. This is crazy because this is bigger than me. And I think that’s what the beautiful thing is.”

450 SPLASH connects, but it's NOT enough for @BiancaBelairWWE against @SashaBanksWWE! #WrestleMania, presented by @Snickers.

Given the talent involved, it isn’t too surprising Banks and Belair managed to match the immense expectations and put on what could be considered one of the best WrestleMania main events ever.
Simply put, the folks behind actually booking the match knew what they were doing from the jump here. It wouldn’t be surprising to find out the company had this exact match in mind when anointing Belair as the Royal Rumble winner.
Written another way, Banks is the perfect fit for Belair. Not just from a mentor standpoint, either. They proved the in-ring aspect of that idea Saturday night as the Superstars combined for jaw-dropping feat after feat. Whether it was Belair carrying her opponent and tossing her into the ring after catching a dive attempt or just ragdolling her around, Banks’ status as one of the best sellers in the company made things about as good as they can get.
Through it all, the match struck that rare balance that few matches seem to find. There were some near-finishes, sure, but it never felt like it was overdone. There was a little finisher-spam, but not too much. Banks, despite getting wallopped—even having her side ripped open by Belair’s whipping hair—never seemed to be out of it. The whole match felt like a 50-50 affair.
It takes a lot of ambition and even more talent to make that all come together during a normal match, let alone one resetting the stage with longstanding implications for all walks of life.

That was SENSATIONAL. I don't think it's hyperbole to say that will go down as one of the all-time Mania main events. Delivered in every way and Banks made Belair in so many ways.

Feel free to tack on the fact this was the first big event with fans in the stands in more than a year as WWE slowly creeps out of the pandemic era, yet another bit of pressure making the feat for these two Superstars all the more impressive.

My god. That was perfect. Sasha Banks vs. Bianca Belair was just perfect

It’s only fitting the bar getting reset here positions all involved in a great way from a story perspective too. Belair’s ascent to top-of-card status has now been set in cement and with a Mania moment like this, she isn’t going anywhere, ever.
Even in a loss, Banks gets the reward of main-eventing a Mania in a historic showing too. Reward, because she was one of those very, very few Superstars who somehow managed to flourish during the strange audience-less era, not suffer setbacks on multiple fronts. She’s always been one of the best in the world, but she elbowed her way into being a company-carrying presence at a time everyone needed her the most. She’s now sitting with a legacy-defining match on what was already a Hall-of-Fame resume.
In a way, the whole match was pretty symbolic of the entire night. A ho-hum card seemed to exceed expectations at every turn, with Lashley winning and setting the stage for something special for the long-run there, Cesaro and Seth Rollins predictably putting on a classic and Bad Bunny re-writing expectations for what a non-wrestler who has a passion for it can do when given the chance.
But Banks and Belair justifiably went on last, seized the moment and ran with it. It wasn’t just a fun match that showcased two top talents and featured a title change—it furthered wrestling as a whole on multiple fronts.