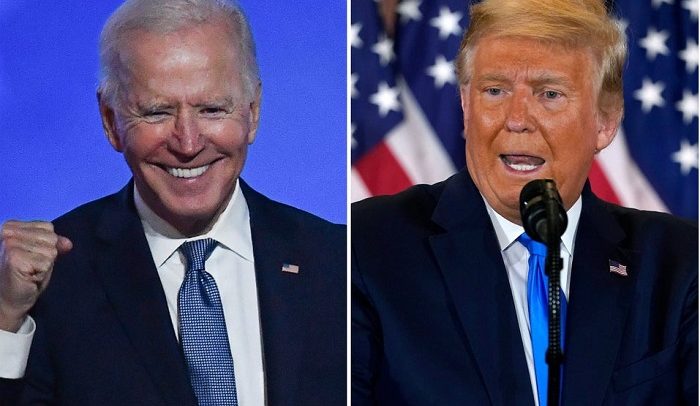 Former Vice President and Democratic presidential candidate, Joe Biden has emerged the winner in the US 2020 presidential election.

Mr Trump garnered 213 votes and is contesting the results.

President-elect, Mr Biden, has taken to twitter to express appreciation to Americans for electing him and Kamala Harris.

“America, I’m honored that you have chosen me to lead our great country.

The work ahead of us will be hard, but I promise you this: I will be a President for all Americans — whether you voted for me or not,” he tweeted.

“I will keep the faith that you have placed in me. https://t.co/moA9qhmjn8”

Mr Biden becomes the 46th elected President of the United States and the first person to win more popular votes in the history of America.

Scores of Democratic supporters are taking to the streets in Washington DC and other states to celebrate Mr Biden’s win.

Mr Trump has refused to accept defeat and is going ahead with legal battle.

Former First Lady and Democratic presidential candidate, Hilary Clinton, has tweeted, saying the result is the will of Americans which must be respected.

“The voters have spoken, and they have chosen @JoeBiden and @KamalaHarris to be our next president and vice president.

It’s a history-making ticket, a repudiation of Trump, and a new page for America.

Thank you to everyone who helped make this happen. Onward, together,” she tweeted. https://t.co/YlDY9TJONs

What you need to know about Biden

He becomes the oldest American to be elected a president. He was born in Scranton, Pennsylvania, United States, on November 20, 1942 (age 77).

He was 40 years old in 1988 when he contested the presidency for the first time. He lost, and contested in 2008 again and lost to Barack Obama.

Mr Biden becomes the second Catholic to be elected a president.

He was the youngest candidate when he ran for presidency in the 1988 election.

His running mate and VP elect, Kamala Harris, becomes the first woman Vice President of the US. There has never been a woman of color to become a Vice President.