‘Brigade Gala Has Been Fantastic’ 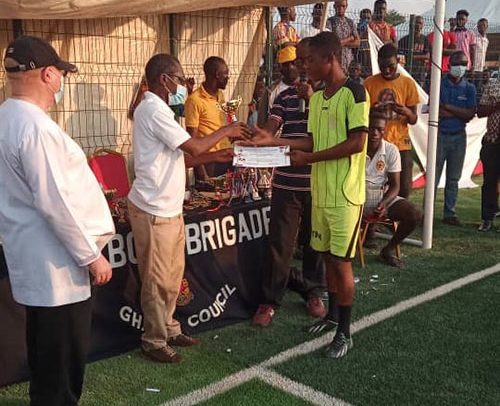 Captain of the winning side (R) receiving his certificate. Looking on is Foh Amoaning

To him, the level of competitiveness demonstrated at the three venues -Tema, Asante Akyem Agogo and Adjiringano has been awesome, which the organisers have drawn a lot of positives from.

He said after last Saturday’s competition at Adjiringano, “It’s been fantastic, I am highly impressed with the level of competitiveness, the teams have so far demonstrated brilliance in almost all departments.”

The law practitioner added, “What makes it more beautiful is the high level of sportsmanship. The teams are using their right ages, and they have shown that given the needed support, the country can rely on some of them as our future stars.”

It was 92nd Accra Company that triumphed after posting a 2-0 win over 116th Accra Company in the final. Evans Hammond of 40th Company won the top scorer’s prize after hitting the back of the net three times, while Wonder Kamasah, 92nd Company, emerged the best goalkeeper.

Organisers of the nationwide competition have said that the Central Region hosts the next edition, which is the fourth in a series this weekend.