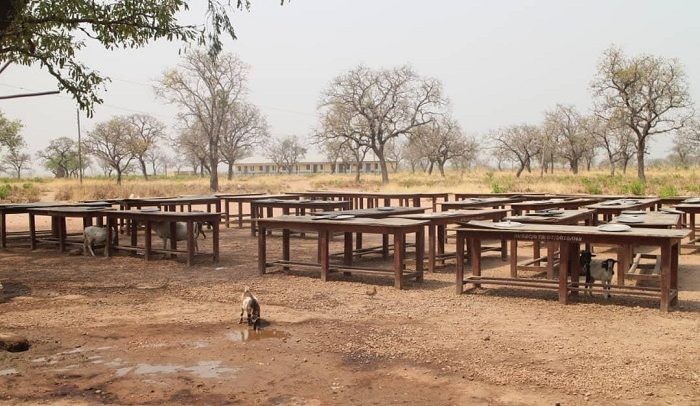 Students of the Buipe Senior High School , have been compelled to eat under a tree over the lack of a dining hall in the school.

The construction of a dining hall which has been at a standstill due to lack of funds has compelled students to eat under the tree.

A visit to the school by DGN Online , revealed that food is served on tables at the Buipe Senior High School which is exposed to unhygienic environment which could affect students when they consume the meals served them.

A total of 849 students population of the Buipe Senior High School are faced with infrastructure challenges which affects teaching and learning.

Some students who spoke to DGN Online, lamented about the effects of the lack of dining hall adding that most often they get running stomach after eating the meals due to the exposed nature of the food in the open.

The Headmistress of the Buipe Senior High School , madam Mercy Ewuntomah , told DGN Online, that the school had no choice than to serve food for the students under the tree because the dining hall project which was started in the school years ago has been halted due to lack of funds.

“It delays in time of students since they do not have chairs to sit on during dining and affects teaching and learning period as well, “she said.

She however, appealed to government to come to their aid to provide funds to complete the construction of the school dining hall.

Meanwhile , the Central Gonja District Chief Executive(DCE) , Mahama Mustapha, has assured the school that next month , contractors will come back to site to commence work on the schools dining hall.