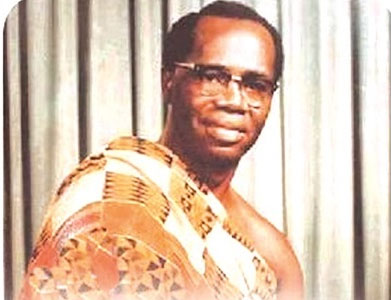 Life, we are told, begins at forty, and for those who have passed on, the celebration of their memory and life is also a ‘do over’ for their loved ones. On 28th of August, the nation as a whole will celebrate the 40th anniversary of the passing of Prof. K.A. Busia. The celebration of his legacy will cover Busia as a man, as a politician and as an academician.

Dr. Busia was an abiding family man and had eight children and six of them are alive. He was also the eldest of thirteen (13) children.  His mother, Nana Yaa Pokua, was of the Sofoase Yeferi Royal Family of Wenchi.  Admittedly, he was also a father to his younger siblings, especially the three girls among them. To ensure that the girls became educated at a time societal values did not recommend female education and was even more unthinkable; it was seen as a betrayal of values of their royal lineage. To offset this, a pacification process to convince the father was effected to atone for his ‘act of insubordination’ to his father because he was taking his daughters to school. In the end, due to Busia’s persistence, all his siblings became educated.

As a politician, Busia assumed the high office of a Prime Minister on 1st October, 1969, when his party, the Progress Party, won the election in a landslide, by winning one hundred and five (105) of the contested one hundred and forty (140) seats in Parliament. Sadly enough, he was overthrown in a military coup led by then Lt. Colonel Kutu Acheampong on the 13th of January, 1972. He was the second person in Ghana’s political history to have occupied the position of a Prime Minister in the Westminster model of government. The first was Dr. Nkrumah (between 1957 and 1960) before he became the President on 1st July, 1960, when Ghana was pronounced a Republic.

The party that Dr. Busia founded and led to electoral victory was the Progress Party – the successor party to the defunct United Party of pre-independent Ghana. Dr. Busia was   a leader of this opposition party and its parliamentary group around 1956 to 1958; thanks to the selflessness of Chief Dombo.

Busia became the Chairman of the Advisory Committee of the National Liberation Council and later, of the Centre for Civic Education. This was a body formed to orient Ghanaians towards civic and democratic values. It was the 1960s version of the National Center for Civic Education (NCCE) under our current Republican Constitution. Dr. Busia was in power for 27 months out of the constitutionally mandated five-year period earmarked for members of government under the 2nd Republican Constitution before he was overthrown in a coup.

Today, the Danquah-Busia-Dombo tradition is the bastion of true democracy in Ghana. The dream and ideals of Dr. Busia and the associated political tradition have indeed shaped the constitution of this country ever since the days of the Second Republic. The various political parties of Danquah – Busia – Dombo traditions manifested themselves in the United Party of pre-independent era and the First Republic of Ghana, the Progress Party of the Second Republic, the Popular Front Party of the third Republic and last but not least, the New Patriotic Party of today.

The two main cardinal principles of his rule were rural development and democracy. The policy of rural development was aimed at developing the country with emphasis on the skill and know-how of Ghanaian youth in what was called ‘The National Youth Corpse’ under the control of the then ministry of youth and rural development.

The clarion call of all Danquah-Busia-Dombo parties is democracy. In respect of democracy, let me say this of him:

“As democracy reverberates on the continent of Africa as a thunderstorm and Ghana, our dear country, now is one of its most shining examples. Let the word go forth to everyone that the values that inform or sustain our democratic values and constitutional development are nothing but the ideas and ideals that Busia lived and died for. Therefore in our dear country’s search for true democracy, Busia, though not very big in physical structure, stands like colossus. He can thus be christened as “Colossus of Ghana’s Democracy”.

As an academician, Busia also made his mark.  He was the first African South of Sahara and definitely Ghana to be made a University Professor at Legon where he headed the Sociology Department from 1950 – 1958. He was also the author of six books and uncountable number of articles of academic importance. Some of his academically acclaimed works include “The Position of Chiefs in theTraditional Political System of Ashanti” and “Africa in Search of Democracy”. Both are reference books of academic importance in most universities the world over, when they are dealing with African                       political thoughts and sociology. Whiles in exile, he became a Professor in Leiden and Hague Universities in Holland and later in University of Mexico. He also lectured in the Northwestern University in the United States of America as well as in Oxford, his alma mater in England, during this period.

Today, the greatest honour we can give to Busia’s memory is to continue to protect our Constitution and guard the sacred opportunity to vote for governments that will fight to end poverty, ignorance, corruption and true democracy. The ideas and ideals that Dr. Busia lived and died for will continue to survive him as his legacy to both the academic and political world.