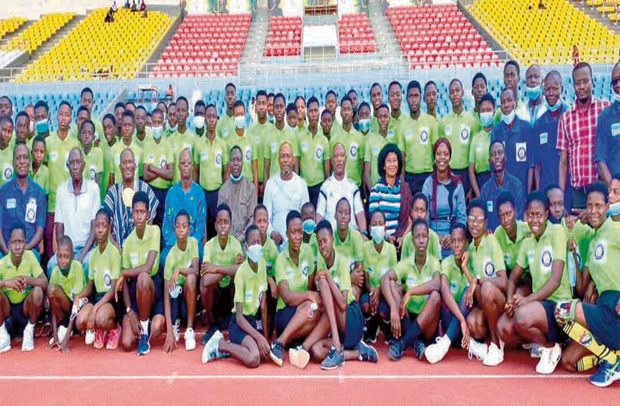 Anim Addo with some officials and young referees

Regional FA Chairman, Robert Otieku Duncan, revealed that he was overwhelmed by the number of young boys and girls who have expressed interest in joining the programme.

He noted that all juvenile and Regional Women’s Division One league matches would be officiated by the Catch Them Young Referees.

Vice Chairman of juvenile committee and ExCO member, Samuel Anim Addo, who stood in for GFA president Kurt E S Okraku, noted that the Catch Them Young Referees are the future of Ghana football, and hoped in the near foreseeable future some of them would officiate at the Mundial.

He said the Catch Them Young policy is in fulfilment of Kurt Okraku’s manifesto promise.

Anim Addo entreated them to uphold the integrity of the game without compromise.

He was of firm belief that the Catch Them Young Referees will end hooliganism at our stadia.

Head of Referees at the Ghana Football Association, Alex Kortey, stated that the programme has come to stay and the FA would do all it could to sustain it.

“The Catch Them Young programme has come to stay and the FA is committed to doing everything possible to sustaining it,” he stated.

Kortey stressed the need for the young boys and girls to be disciplined and uphold the integrity of the game.

He entreated them to constantly read the laws of the game in order to abreast themselves with the new changes in the laws.

Fifty ‘Laws of the Game’ books were printed and distributed to the district instructors.

Besides, 120 officiating kits and 140 flags and whistles were also shared for the districts.

It was launched ahead of kick off of 2020/2021 juvenile football league on Sunday.