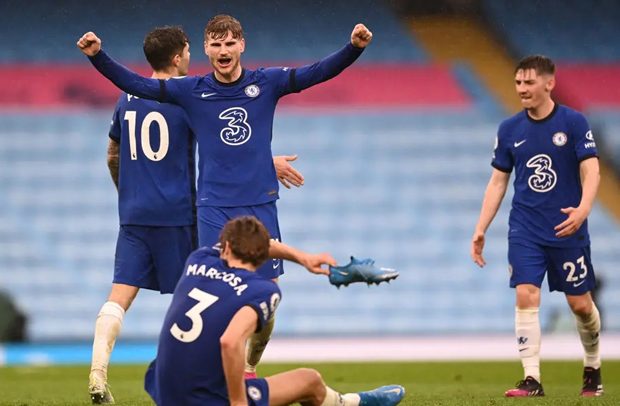 Manchester City missed the opportunity to wrap up the 2020-21 Premier League title against Chelsea at the Etihad Stadium as they fell to a 2-1 loss in a match-up of teams that will contest the Champions League final on May 29.

Raheem Sterling opened the scoring for City on the stroke of half-time before Sergio Aguero missed a penalty in what turned out to be a crucial moment; Hakim Ziyech levelled For Chelsea after the hour mark, before Marcos Alonso scored the winning goal two minutes into added time.

Gabriel Jesus set up City’s goal on 44 minutes with a cross into the box that was meant for Aguero, but City’s all-time leading scorer produced a bad touch and was fortunate the ball fell to Sterling, who smashed it into the net.

Aguero had the opportunity to make up for his mistake three minutes later when Billy Gilmour gave away a penalty for pulling down Jesus, but an attempted Panenka enabled Edouard Mendy to casually stand up and catch the spot kick.

“It’s his decision. The taker makes his decision. He decided to take it his way, I’ve nothing to add,” City manager Pep Guardiola said after the game.

Aguero, though, took to Twitter to say he was sorry: “I would like to apologise to my teammates, staff and supporters for missing the penalty. It was a bad decision and I take full responsibility.”

City were left rueing that missed chance on 63 minutes when Ziyech levelled the score. Christian Pulisic and Cesar Azpilicueta teamed up with some nice once-twos before the Chelsea captain passed Ziyech, who hit a low shot past Ederson.

Chelsea had the ball in the net twice more — Timo Werner and substitute Callum Hudson-Odoi had goals ruled out for offside — before Tuchel’s side struck in the game’s final moments, with Alonso’s scuffed shot delaying City’s dreams of clinching the Premier League title.