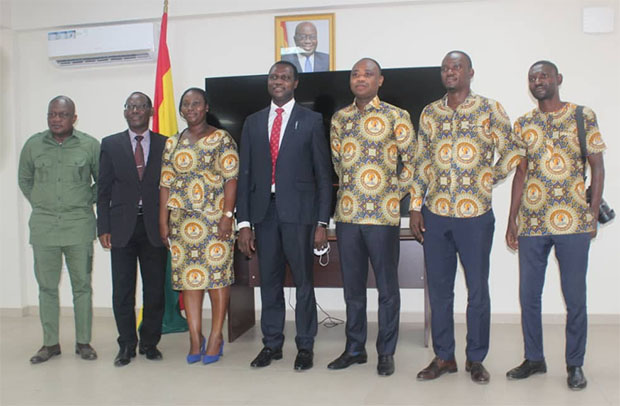 Officials of CRI (in African print), with Dr Yaw Osei Adutwum (middle) and his officers

Child Rights International, (CRI) a non-governmental organization working to promote the welfare of children, has called on the government to ensure children are protected while in school.

Executive Director of CRI, Bright Appiah, said the country’s school environment is becoming a threat to the development of children.

“These few weeks, we have recorded two deaths as a result of negligence in our schools; one in Sunyani and the other in Accra.  It is important we look at the security issues in terms of people who participate in the school environment and the private sector operation of schools to secure the welfare of children,” he said.

Mr Appiah made the call during a courtesy call on the Minister of Education, Dr Yaw Osei Adutwum where he congratulated him on his appointment.

He said while it is important to have religion as part of our cultural life, the practice in schools is gradually becoming a ground for the battle of supremacy in terms of what religion holds and what it is not.

He thus urged the minister to find ways of regulating the school environment so no child is discriminated against because of religion adding, “it is only the right of children to an education that must be paramount irrespective of the people who are managing the school or the parents.”

Mr Appiah also called for a consistent curriculum for the development of learners.

Dr Adutwum, in response, expressed his appreciation for the work CRI is doing to uphold the rights and welfare of children in the country.

He said for the curriculum development, the textbooks for primary schools are being produced and will be released unto the market soon to complement teaching and learning adding that the Junior High School (JHS) curriculum that will be rolled out next year will have the textbooks ready so there is no delay.

“At the ministry, our concern is to provide quality education and one of the things we are going to do is the roll-out of the national standardized test to improve educational outcomes,” he said.

He said currently the only national assessment on education is done after 11 years of schooling by which time it will be too late for interventions.

“So what the president has directed is that from Primary two, four and six, we have this national examination to give us an idea of their performance for interventions to be properly targeted. But because of the pandemic, we decided to test only the primary four students this year,” he added.

He said the idea is to get an indication of how well the students are performing for appropriate targeting of interventions for better learning outcomes.