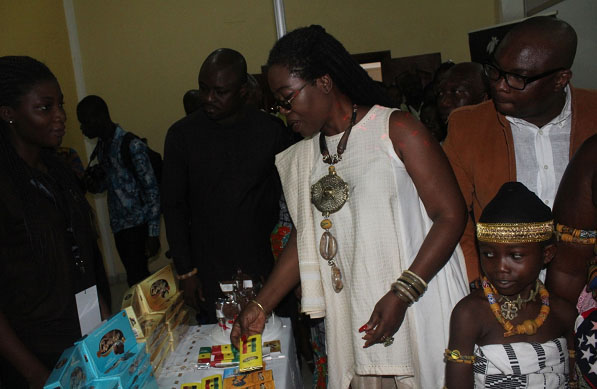 Chief Executive Officer of GEPA, Ms Asabea Asare, at one of the chocolate exhibition stands

The figure represents over 27 per cent in terms of the top 10 performing non-traditional exports in 2018.

This came to light on Friday at the maiden edition of the African Cocoa and Chocolate Expo 2019 organized by the Ghana Export Promotion Authority (GEPA) in Accra, with support from Know Your Cocoa Foundation.

The three-day event brought together industry leaders, emerging businesses and chocolate lovers for knowledge sharing, networking and sampling. It was aimed at showcasing and celebrating the achievements of businesses in the cocoa value chain under the theme: “Celebrating innovation, motivation, consumption.”

The Director of Domestic Trade at the Trade Ministry, Ntim Donkor, who spoke on behalf of the Deputy Minister, Carlos Ahenkorah, said the cocoa industry had the potential to rake in billions of dollars annually if the right attention was given to the sector.

He said an estimated 800,000 farm households, particularly small holder farmers, derived at least 60 per cent of their annual income from cocoa alone, adding that the vision of the expo was aligned to the ministry’s policy and activities which promoted industrialization and job creation.

The Chief Executive Officer of Ghana Export Promotion Authority (GEPA), Asabea Asare, expressed the hope that the expo would grow to become a truly African premier…

“The aim is to deepen inter-African trade cooperation and synergies, particularly within the context of the implementation of the African Continental Free Trade Area Agreement (AfCFTA). A series of fora has been planned to be held on the sidelines of the exhibition aimed at exposing participants to the opportunities available in the cocoa value change and how to take advantage of them,” she added.