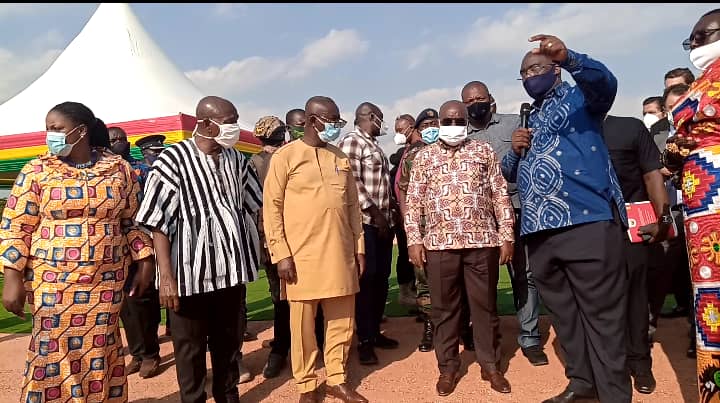 MANAGEMENT OF AFCONS Infrastructure Limited has given President Nana Akufo-Addo the strongest of assurances that the coronavirus pandemic will not delay the completion of the Tema-Mpakadan Rail Project.

AFCONS Infrastructure Limited is the company working on the Tema-Mpakadan rail project.

Vice President of AFCONS Infrastructure Limited, Udai Veer Singh, gave the assurance in a welcome remark at a ceremony held on Wednesday, August 5, 2020, at Old Akrade.

President Akufo-Addo was at Old Akrade to inspect the construction of a bridge across the Volta River and Tema-Mpakadan Rail Project.

According to Mr Singh, the outbreak of the coronavirus caused a slow down in the project for three months.

However, he said, the pandemic was not peculiar to Ghana and as such there cannot be an excuse to delay the project.

He noted that 65 kilometres out of the total 97 kilometres making up the project, have been completed.

He said in the coming month, 10 more kilometres will be completed.

Contract for the Tema-Mpakadan initially Tema-Akosombo rail project was signed on November 18, 2016.

President Akufo-Addo who was led by Minister of Railways Development, Joe Ghartey, to inspect the project, thanked AFCONS Infrastructure Limited for carrying out “significant” work on the track.

Recounting his tour of the rail project a year ago, Mr Akufo-Addo said “significant advances have been made.”

He noted that the assurance from the AFCONS group about completing the project on schedule was “the most comforting statement” he had heard in a long time.

Chief Executive Officer (CEO) of the Ghana Railways Development Authority, Richard Diedong Dombo, assured that the project would be completed by March 2021.

The construction of the rail project was conceived as a port-to-port project in 2007 under the former President Kufuor’s administration.

As a result, in 2007, a contract was signed for a feasibility study to be conducted for a Tema to Buipe multimodal transport system via Akosombo.

In furtherance of this, in November 2016, an agreement was approved by Parliament for a Tema to Akosombo railway line.

Minister for Railways Development, Joe Ghartey, giving a brief history of the project, said upon assumption of the Akufo-Addo government in January 2017, the agreement approved by Parliament was reviewed for three reasons.

The reasons included a possible effect on the Akosombo Dam, since the project involved drilling a tunnel through the rock to the Akosombo Port. The tunnel, he said, was only going to be 60 meters away from the Akosombo Dam at a one point.

According to him, another reason was Security concerns.

He added that a third reason was the desire to create economic activity at the project completion site.

He said the Paga rail project has started, noting that it is only under the Akufo-Addo Government that a standard gauge railway line has been constructed in Ghana.

He stated that re-electing President Akufo-Addo will lead to massive development in the railway sector.

He stressed that Mr Akufo-Addo remaining in power would result in more works being done in the rail sector than there have ever been since Independence.