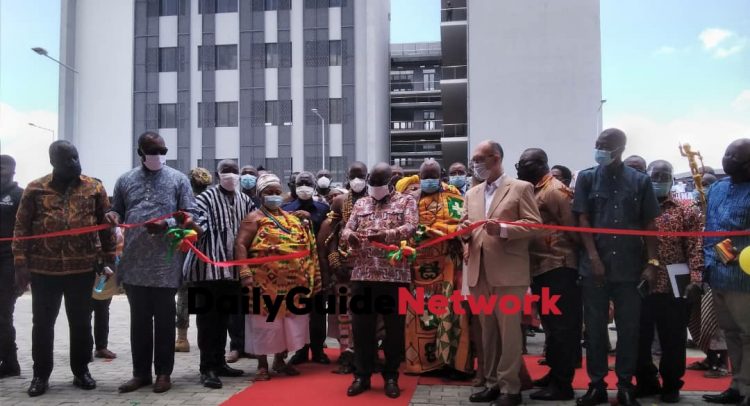 THE YILO – Krobo Traditional Council in the Eastern Region has honoured President Nana Akufo – Addo for constructing the University of Environment and Sustainable Development, known as the Eastern University, on the Krobo land.

President Akufo – Addo on Wednesday commissioned the first phase of the University and also cut the sod for the commencement of the second phase.

The opposition National Democratic Congress (NDC) after losing 2016 elections incited the Krobos against the government on the claims that President Akufo – Addo will relocate the main campus of the University of Environment and Sustainable Development from Somanya to Bunso in the Akyem Abuakwa area.

Ex-President John Mahama after losing the 2016 elections and left with seven days to exit office stormed Somanya to cut the sod for the construction of the University.

But President Akufo-Addo during a tour to the site in November 2018, noted that the agreement between Ghana and the Italian Government for the establishment of the University did not allow him nor anyone else to relocate the University to Bunso, as was being propagated by the NDC.

In a bid to shame the critics, the Paramount Chief of the Yilo – Klo State, Nene Oklepeme Nuer Anobaah Sasraku II led by his elders presented colourful “Kente” and “beads” to President Akufo-Addo and also the Minister of Education, Mattew Opoku Prempreh for being able to make the establishment of the University coming into reality on the Krobo land.

Nene Sasraku presenting the gifts to the President said “we are grateful to you Mr President for this University, May God richly bless you”.

In April 2013, the then President John Dramani Mahama inaugurated a committee to prepare a road map for the establishment of the University to focus on addressing critical environmental sustainable development challenges.

In 2014, the Cabinet submitted a bill to Parliament, which was approved and endorsed by the President in 2016.

Parliament, in October 2016, ratified an agreement between the Government of Ghana and the Deutsche Bank for a €38-million loan for the construction of the university in Somanya and its satellite campus at Donkorkrom.

In a short ceremony, the President reiterated that his quest to establish the University of Education and sustainable development (UESD) in the region is to improve education and is of the view it will go a long way to benefit the people in the region and the country at large.

He said, having access to quality education and skills screening will change the fortune of the country.

He continued that, the introduction of UESD is aimed at providing higher education, research, and disseminate knowledge.

He stated that the protection of the environment and mandate is to develop Agricultural business.

The official commencement date for the project was set on January 9, 2018, as the Contract agreement was signed on 6th May 2020.

The university is currently in the hands of interim management consisting of engineers and technicians who are taking care of the maintenance of equipment and other technical issues.

Under Phase One of the project, the following facilities have been constructed by Messrs Contracta Costruzioni Italia,

An additional laboratory Building for the School of Agriculture and Agro-Entrepreneurship Development, 7 No. Laboratory Rooms with a total seating capacity of 132, 7 No. Apparatus Rooms, and telecom Rooms.

The cost of this phase is €45,575,000. This was under a Commercial Agreement with M/S Contract Construzione through Financing Agreements with the Deutsche Bank S.p.A and the Export Credit Guarantee from Italy.

The EPC/Turnkey Contract Agreement with M/S Contract is valued at Forty-nine million, Eight Hundred and Ninety-one Thousand, Ninety-eight Euros (€49,891,098.00) for completion within 30 months.

Government, through the Ministry of Finance, has granted financial clearance to the university to recruit an initial 300 staff members to enable its smooth take-off.

The Interim Council is also expected to commence recruitment of its first batch of undergraduate students for the 2020/2021 academic year.

The Government of Ghana has also received a loan from the Export-Import Bank of Korea from the resources of the Economic Development Cooperation Fund (EDCF) of the Republic of Korea in the amount of US$90,000,000 toward the cost of the Establishment of the University of Environment and Sustainable Development (UESD), Bunso Campus Project.

The loan agreement was signed in 2018.