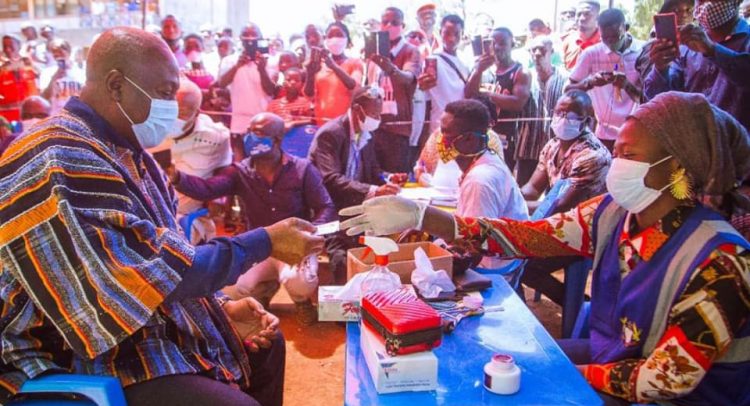 He visited the Bole District Assembly Electoral Commission’s registration centre on Wednesday, August 5, 2020 and went through the process to acquire his voter ID card.

The former President after acquiring his voter card paid a courtesy call on the Chief of Bole, Bolewura Sarfo Kutuge Feso I.

Addressing residents, Mr Mahama urged Ghanaians to go out in their numbers to acquire their voters ID cards in order to vote out the “none-performing” Akufo-Addo’s administration come December 7.

“Tomorrow is the final day for registration and so I’m urging everyone who has not registered yet to come out and register to vote, we all know your vote is your power.”
He stressed that Ghanaians have been through tough times in the four years of the Akufo-Addo administration which has a history of failed leadership and a dictatorship government.

“A lot of things are happening like closure of radio stations, harassment of journalists, the questioning Ghanaians of their citizenship and the use of the military to prevent people from registering. It all shows a government who is determined to do anything to hang onto power.”

Former President Mahama assured Ghanaians that the National Democratic Congress (NDC) will bring back the peace and united country to ensure that Ghanaians feel they all belong to this country.

“Some people do not own this country more than others and so everybody register and ensure that we kick out this none performing government and it’s been 8 years of abandoned projects , 8 years of failed promises , 1V1D has not materialized all the dams dry up in the dry season, most districts do not have any factory yet and it’s all been propaganda and propaganda.”

He was optimistic that Ghanaians have seen the lies by the Akufo-Addo administration and come December 7 they will kickout the NPP government.