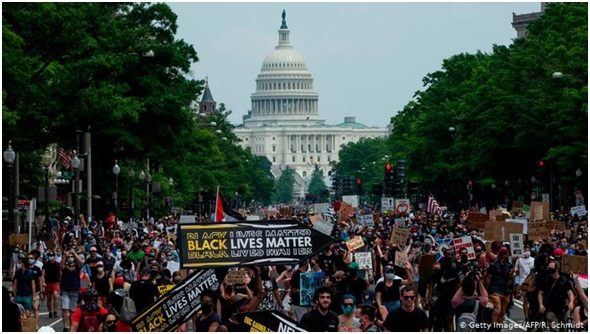 What has that got to do with his death? Absolutely nothing! If your brother had asthma, and someone intentionally introduced smoke into his room, and he died, you would be very upset if the system said “well he had asthma, so nothing to see here”. Look up ‘Proximate Cause of Death’ and you’d find that even if Mr Floyd was carrying the plague, someone’s knee pressing on his neck for almost 9 minutes cancels out all other probable causes.

Lots to discuss. This is an opinion piece. Do NOT shoot the messenger.

It is tempting to say we have tribalism back home to pay attention torather than systemic racism far away in the United States of America.But too many a time does a powerful movement start and then nothing happens afterwards, be it at home in Ghana or elsewhere. I hope this is not one of those. That is why we’re all adding our voice. The best way we can effect change as part of a greater community is if we all add our voice.A lot of the leaders of America today can far too easily drown the voices of those currently advocating. If you can lend your voice to make your brothers’ and sisters’ issue be heard, do it!

While John Agyekum Kufuor was President of Ghana, I personally heard many people brag about how they were related to him. “Oh, Kufuor? Yeah I know him… he’s my mother’s cousin’s brother’s wife’s nephew on the father side”… that kind of thing. Why? Well maybe it’s because everybody wants to be associated with something major and memorable. Maybe it’s because everybody wants justification to overdramatise their role in relevant history, even if it means shamelessly professing to prove some kind of lineage to a powerful man only by word of mouth.

Well, something major and memorable is happening in America, the world’s biggest economy with a GDP of over 20 trillion US dollars just last year. This goes deeper than your average everyday protest or some hashtag culture. You might have heard about it. Here is your chance to be part of some history. Since the days of Martin Luther King, Jr. in the 1960’s, never has there ever been protests against racial injustice as large, as prolonged and as widespread as what is currently happening in the USA. The killing of George Floyd in broad daylight hit a collective nerve across the world.

My President is Black, and even he, amidst the complexities of international diplomatic relations, found it best to express his support for what’s happening in America. On behalf of the people of the Republic of Ghana, President William Nana Addo DankwaAkufo-Addo expressed his condolences to the family and loved ones of the late George Floyd. He further stated that Ghana stands with “our kith and kin in America in these difficult and trying times, and we hope that the unfortunate, tragic death of George Floyd will inspire a lasting change in how America confronts head on the problems of hate and racism”.

We have all seen the footage of police officer Derek Chauvin smirk while he literally asphyxiates a handcuffed black man by placing his knee on George Floyd’s neck… in broad daylight… while Floyd repeatedly said “I can’t breathe”, “Mama”, and “please”… while onlookers were recording everything in plain sight… while onlookers were screaming at him to stop.

Question: Where does one get the audacity and the misplaced vim to commit such a gruesome crime when he ironically yet legally is law-enforcement?

Law enforcement had a big part to play in America’s complicated history with African Americans. Before they were African Americans, they were legally Slaves, Cargo. It is only logical to boldly infer that, back then, back a couple centuries ago, US law enforcement were trained to be racist, because that was the law, back then… because law enforcement to them would literally mean enforcing laws that are now racist, but back then were legal and widely accepted. It makes sense, the inference makes sense.

Nonetheless, when slavery is abolished, but the systems and institutions that are put in place aren’t fully purged ofthe very protocols and processes that make racism work, then what’s the point. A system works only when IT WORKS. Now, the African American community together with overwhelming support from all over the world is saying the system isn’t working that well for the race of former slaves. That’s what all this commotion is about.

That’s what all the marching and protesting is about. It’s not for an infinity gauntlet to snap racists and racism out of existence. It’s an open admission that there will always be racism in the hearts and minds of some part of society but when systemic enablers are legally in place to facilitate and/or exonerate the illegal, how is that even remotely fair to the victims that are suspiciously predominantly the black community?

The marching and the protests is their roaring cry out just like George Floyd did that the system is and has been suffocating them too. Martin Luther King, Jr. would be having nightmares by now because this is so not his dream. In his own words,

It is a dream deeply rooted in the American dream. I have a dream that one day this nation will rise up, live out the true meaning of its creed: “We hold these truths to be self-evident, that all men are created equal.”

Understand that George Floyd wasn’t an armed robber or some dangerous criminal to warrant such harsh approach by the police officers. Harsh is an understatement if you’d want to catalogue all the unfortunate incidents that culminated to these protests. I had a healthy debate with a gentleman last week who argued that US Police has a zero tolerance for crime and therefore should be more understood.

I understand that the logical basis for the Zero-Tolerance Policing is that if you stomp out minor crimes early, they wouldn’t grow to be full on felonies. To carry this plan out, the US government flooded low-income neighbourhoods with hundreds of thousands of police officers. This zero tolerance policing culture is what gave way to the famous stop-and-frisk that allowed police officers in the US to stop you by the road arbitrarily and search you, without needing to give you a reason before for doing so.

Deterrence is what I think should have been on the agenda. In some way I think that was the initial idea behind Zero-Tolerance Policing policies. But in some other twisted way, minor crimes within these communities started getting punished as if they were major crimes, and the laws allowed this. Black Americans were getting thrown in jail for minor offences as a way to “crack down” on crime, which makes no sense to me.

Look at it this way.

When a teacher wants to deter a class from making excessive noise during a lesson, yes he puts one or two students in detention. When that doesn’t work, for whatever reason, he doesn’t put the whole class in detention forever, as this will defeat the purpose of the deterrent. You don’t double down on a failed tactic; you have to cook up fresh ones.

The residents of low income neighbourhoods usually pick up bad habits growing up. It is good social work that continues to save many kids like that from a bad path. So what about Social Services? Maybe fund that aggressively.  Aggressive funding for social services and awareness is what you do if you want to reform and not punish a whole community already suffering from the aftereffects of many centuries of oppression.

One sure way many people invalidate an opposing view is to slam it as not having all the answers. You don’t need to have all the answers in the world to be right. No movement is 100% perfect. But if you tell me nothing seems off to you when a man is killed by the road in a painful, sadistic  manner as George Floyd was and you don’t feel the urge to say “ hey, that’s totally wrong and I want to add my voice to the millions saying ‘this shouldn’t be allowed to happen again’ because it’s only human to do so”, then you might need a psychological evaluation.

On 25th May, George Floyd popped into a store to buy some cigarettes in Minnesota, USA. He paid with a $20 bill. The person at the store suspected the note was counterfeit. So, stepped out and asked Floyd to return the cigarettes. Floyd refused. There was no violenceat this point around or between Floyd or the storekeeper, only a verbal altercation. The storekeeper called 911. Fast forward a little later and the 46-year old black father of 5, nicknamed Gentle Giant, was handcuffed face down in the street, begging for his life while a police officer pressed his knee to Mr Floyd’s neck for almost 9 minutes.

His murder was not a fluke. There exists a real distortion in the numbers when we talk about racial injustice in America. The numbers verify this. Don’t let the hashtags fools you. All lives do matter. All races do matter. But if you asked me for water to put out the fire in your house and I said “hey my house matters too”, that won’t stop your house from burning. This would be a completely tone-deaf approach to your harsh reality, especially when there’s enough water to go around, especially when it is your legal right to have this water. So Black Lives Do Matter, and I hope no race has the urgent need to scream “I Matter” as much as African Americans are today in the United States of America.

Additionally, what a time for a revolution! There’s a pandemic out there and Americans in all 50 States have taken to the streets to fight police brutality and systemic racism. Definitely this will affect the number of infected people. Businesses will come to a halt, even more so than they were because of the pandemic. It doesn’t take an economic connoisseur so see that if one sneeze can wipe off 30% of the US stock markets, it would be safe to say that Floyd’s murder and these widespread protests in all 50 States would have tipped the markets’ scales materially had it not already been in a tumble that’s getting back up.

A lot of people are concerned more with activism than work at the moment in the United States of America. That will form part of a new normal moving forward to some degree.All this will affect you in your home country one way or another, whether you see it happening or not. The world is very much interconnected now. So best to pay attention and happen to something rather than let something happen to you. Don’t slander a just cause by fixating on the few mind wanderers that maybe ask that we literally get rid of the police. Don’t throw out the baby with the bath water. Many causes have asked for equality and gotten close to it or more. I think Black America asking to just “matter” shouldn’t be that big an ask, should it?

Hit me up on social media and let’s keep the conversation going! I read all the feedback you send me on LinkedIn, Twitter, Instagram and Facebook.

Go to bit.ly/maxwritesto read all my previous articles.

Also, feel free to send me your articles on relevant topics for publication on the Macroeconomic Bulletin. I’d give you full credit, an intro, and an outro. Kindly make it about 1000 words.

Have a lovely week!

Maxwell Ampong is the CEO of Maxwell Investments Group, a Trading and Business Solutions provider. He is also the Business Advisor for the General Agricultural Workers’ Union of TUC (Gh). He writes about trending and relevant economic topics, and general perspective pieces.