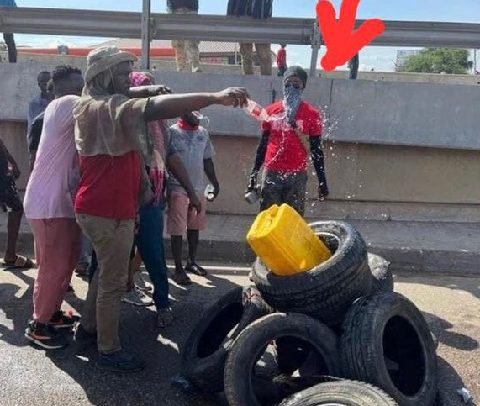 The Danquah Institute, a political tink tank group based in Accra has condemned pressure group associated with the opposition National Democratic Congress (NDC), Arise Ghana for embarking on violence demonstration on the first day of its two-day demonstration.

According to the Institute the violence that characterized the demonstration is barbaric, unlawful and un-Ghanaian behaviour exhibited by some persons who took part in the demonstration of Tuesday June 28, 2022.

The Institute in a statement admonished Ghanaians not to take the country’s enviable democracy secured over the last three decades for granted.

It said “Since our return to constitutional rule in 1992, the people of Ghana have resorted to mainly democratic means to express our satisfaction or otherwise of government policies, economic and social trends and the general conditions of living.

“The history of demonstrations as a form of protest in Ghana pre dates our independence. As the first country in sub-Saharan Africa to have gained independence from British colonial authorities, the country has witnessed its fair share of protests and demonstrations some of which resulted in national good. We must however understand that contemporary Ghana is recognized as one of the relatively stable democracies in Africa. This status if for nothing at all stems from the ability of the nation to also ensure demonstrations are lawful and are prevented from becoming uncontrolled, violent and chaotic and destabilizing the peace that is enjoyed by all citizens of the country. This also allows the safety and security of all citizens who either actively participate in the demonstration or who choose not to, but would want to engage in their usual day to day activities.

“After initially indicating that they intended to hold a Forty-Eight (48) hour demonstration, the High Court of Ghana, upon an application by Ghana Police Service, determined the time, route and location for the planned demonstration. The Court was clear in its Order that the demonstrators were to converge at the Obra Spot located at Circle at 8am, and the demonstration was to end at the Independence Square at 4pm, where a representative of the President would receive their petition, if any on the day in question. The organizers of the demonstration were thus admonished to strictly adhere to the Order of the Court as well as the Public Order Act.”

Danquah Institute believes that the attitude exhibited by the protesters on the first day of the demonstration, showed clearly that they had no intention of complying with the Public Order Act or the Court Order by their insistence on using an unapproved route leading to the Jubilee House.

The statement stressed that “It is also deeply unfortunate that some of the demonstrators started throwing stones and other offensive weapons at the Police for no reason, leading to injuries of Police Officers and destruction of public property including Police vehicles. The Institute believes that well-meaning Ghanaians who are simply embarking on a peaceful demonstration would not have come, armed with offensive weapons, stones and rioting devices, if not pre-meditated by a motive to create violence and destruction.

“We wish that the general public would note that never in the history of our Fourth Republic has there been a demonstration where the Ghana Police Service has been pelted with stones and other offensive weapons. We unequivocally condemn this action and appeal to people’s conscience to do likewise. We also have noted evidence-based allegations of the support received from some known personalities within the opposition NDC in respect of the aforementioned violent scenes and unlawful behaviour, and we wish to comment that this is a rather unfortunate dent in our democracy. We are certain that the timely and professional intervention by the Ghana Police Service, curbed a situation that could have degenerated and escalated to the point where even more public and private property would have been damaged, or worse still precious lives lost.

“It is worth noting that most of the issues communicated as the reason for the demonstration are irrevocably linked to the Covid-19 pandemic period and the Russian-Ukraine war and are globally being experienced. The increasing costs of fuel and utilities; high demand met with pandemic related supply shortages of consumables which has caused price hikes and increased rates of inflation is occurring all over the word. We are happy that measures to address economic challenges have been taken by the Government. The unprecedented economic growth of the 2017-2019 period is not to be forgotten. We believe that Government will continue to make the best decisions for the benefit of all Ghanaians.”

They commended the security services for putting in their best in protecting the country “from persons who seek to create instability, applauding the Ghana Police Service for their professionalism and urges them to deal with all persons in accordance with the law.