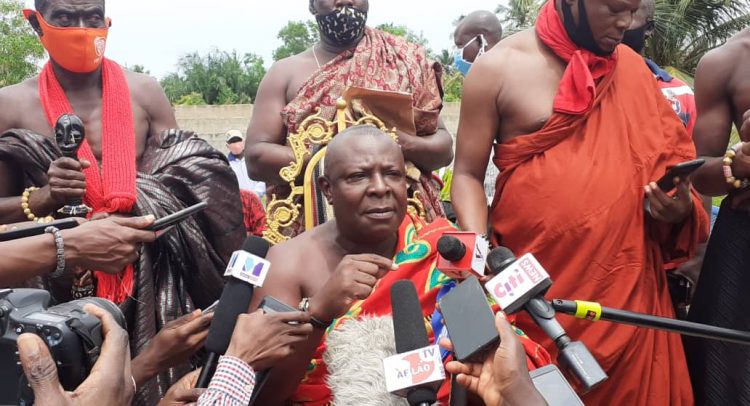 The Aflao Traditional Council has condemned what they describe as unwanted attacks on their people by some security personnel deployed to intensify border security in the Ketu South Municipality.

In a press statement issued last Monday, June 29, 2020, the council said: “We the Chiefs of Aflao Traditional Council in collaboration with Aflao indigenes home and abroad wish to appeal to H.E. Nana Addo Dankwa Akufo-Addo, the President of the Republic of Ghana to call to order the military personnel brutalizing the civilian population.”

They also appealed to the President to as a matter of urgency withdraw the obstacles placed in the daily activities of the Aflao people, most of whose economic life is dependent on business on both sides of the borderline.

Togbe Adzonugaga Amenya Fiti V in the statement which was read on his behalf explained that Aflao is the second most populous town in terms of population after Ho in the whole of the Volta Region and one of the top three port revenue generators in Ghana.

That notwithstanding, the over 70,000 population continues to be denied developmental projects that create jobs. The fortunate ones that land jobs in Lome (Togo), including headporters (Kayayes) and truck pushers, are stuck home due to border closure precipitated by Covid-19.

It is for this reason that some try to cross the border. It is purely a survival issue, hence the increased security presence and alleged intimidations is only adding more injuries to their woes.

The Chiefs who surrounded their Overlord clad in black and red attire said tents and checkpoints have been mounted all over the rural settlements, including markets specifically from Akito to Wudoaba against civil norms, thereby inhibiting people from performing their daily activities and their right to life and movements.

He said, the presence of the troops who arrived in the area last Thursday, June 18, 2020 is “causing fear and panic amongst the inhabitants as the officers embark on house to house searches within the towns. Additionally, the constant harassment of citizens occupying the borderlands are having a detrimental effect on agricultural and other produce being brought to the markets.”

They also wondered why the government seems to be projecting its power across the Volta Region without doing same at the Western frontier with Ivory Coast or the Northern frontier with Burkina Faso.

To this end, the armed and uniformed personnel consisting of the Army, Police, Immigration and National Security are doing more harm than good. More so, continues unprovoked intimidation and oppression ends up empowering the oppressed to react, Togbe Fiti warned.

“We as Chiefs cannot look on unconcerned when security personnel brutalize our citizens no matter how difficult the situation they find themselves in,” Togbe Fiti noted.

Adding that “because we are peace-loving does not make us cowards; when the fire is lit, there will be no turning back and the said fire will consume everything in its path.”